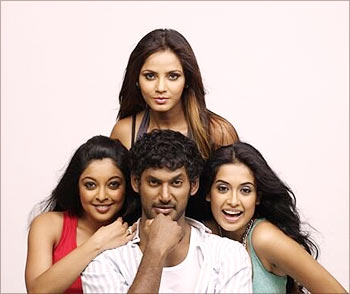 Unfazed by his last two disastrous outings, (Sathyam and Thoranai) Vishal will be seen on the big screen once again with his latest Tamil movie Theeradha Vilayattu Pillai (TVP).

And joining him are three three beauties from Mumbai -- Neetu Chandra, Sarah Jane and Tanushree Dutta.

The film is scheduled to be one of the 2010 Pongal releases along with Vijay's Vettaikaran and Ajit's Asal.

Vishal's brother Vikram Krishna is producing the movie under his home banner G K Film Corporation. Thiru has written and directed the movie.

It is said that Vishal plays Karthik (a common name for sophisticated young guys in Tamil films), a playboy. No wonder, he has three hot beauties as company.

One of the most talked about scenes from the movie is a song picturised on Neetu Chandra. The scene shows her in bathtub full of -- not red roses -- but red chillies! Talk about imagination running wild.

The introductory song choreographed by Bosco and Ceasar from Mumbai on Vishal and his three heroines, is another song which is making news.

Music is by Yuvan Shankar Raja. Vishal and Yuvan are coming together again after a small gap.

With Sony Music acquiring the rights, this album is also expected to rock like the duo's earlier hits -- Sandaikozhi, Thimiru and Thamirabharani.