Ram Charan Teja's next after Magadheera 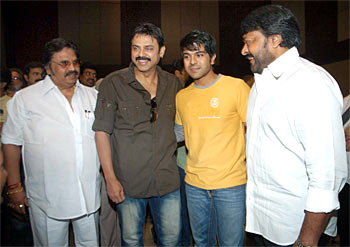 After the stupendous success of his Telugu film Magadheera, Chiranjeevi's son Ram Charan Teja is moving on to his next project, a romantic entertainer to be directed by Bhaskar (of Bommarillu and Parugu fame).

Magadheera, which set cash registers ringing at the box office, is nearing the 100-day mark.

The new film is called Orange, which Nagendra Babu, Ram Charan Teja's uncle and the film's producer under the banner of Anjana Productions said, "is the working title which is likely to be changed. The film will be shot in Hyderabad and Australia."

Charan is likely to have an image makeover -- from an action one to a lover-boy -- in the new film. Genelia D'Souza and Kajal Agarwal are likely to join the cast.

After the mandatory puja, Dasari sounded the clapboard, Rama Naidu switched on the camera and K Raghavendra Rao directed the first shot. Speaking on the occasion Bhaskar said, "this is a feel-good movie and I hope to repeat the hattrick [for him and Charan]."

Charan too spoke on the occasion. "It's a well-written script which is a new challenge to me. I hope I will justify the script and satisfy Bhaskar," he said adding that he had always wanted to do a film with Naga Babu. "I always sit with him and chat on movies," he added.

Are you ready for Ram Charan Teja's Magadheera?