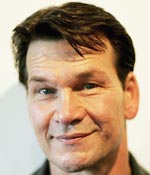 'Patrick Swayze passed away peacefully today with family at his side after facing the challenges of his illness for the last 20 months,' People magazine quoted Swayze's representatives as saying in a statement.

Whoopi Goldberg, who starred with Swayze in one of his biggest movies Ghost, remembers Swayze as "funny man."

'Patrick was a really good man, a funny man and one to whom I owe much that I can't ever repay,' said Goldberg, 'I believe in Ghost's message, so he'll always be near,' she added.

'Patrick lived a hundred lifetimes in one,' said Rob Lowe, who appeared with Swayze in The Outsiders and Youngblood. 'I will remember him for that, and I will remember him for how much he loved his wife Lisa. He was such an intense actor, so full of passion and vigour. He definitely made the most out of it. It's a sad day,' he added.

Swayze was diagnosed with advanced stage of pancreatic cancer in January last year. However, he kept shooting for A&E series The Beast while undergoing chemotherapy and never lost hope.

US slowly turning towards Hinduism: Newsweek