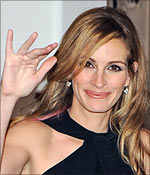 Laxmi for Hazel, Ganesh for Phinnaeus and Krishn Balram for Henry, Julia Roberts' children may really find it difficult to pronounce their new names.

The names were given to the Hollywood superstar's three children by Swami Daram Dev of Ashram Hari Mandir here, where the actress is busy shooting for her upcoming film Eat, Pray, Love.

"Julia came to seek my blessings and I told her to learn good things about Indian culture. I said that your children should have new names. I named her twins hazel and Phinnaeus as Laxmi and Ganesh while the two-year-old Henry will now be called Krishn Balram," Swami Daram Dev, President of the Ashram in Pataudi, told PTI.

"She repeated the names after me and assured that she will call them by their new names and said that she will try her best to learn about our culture," he added.

Dressed in a blue dress, Roberts visited swamiji on Tuesday along with her three children and interacted with him for about 15 minutes.

The Ashram, which boasts of a Sanskrit Mahavidyalaya, hostels for boys and girls, a hospital and an old-age home,
has been redecorated to suit the storyline of the film.