News
Business
Movies
Sports
Cricket
Get Ahead
Money Tips
Shopping
Sign in  |  Create a Rediffmail account
Rediff.com  » Movies » Love the fashion, the girl not so much

Love the fashion, the girl not so much 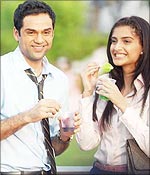 I've always found Emma Woodhouse to be one of Jane Austen's most exuberant, winsome creations.

Especially in comparison to Austen's other popular heroines -- the levelheaded Elinor Dashwood (Sense and Sensibility) or a self-respecting Elizabeth Bennet (Pride and Prejudice).

A patronising child-woman, Emma is good-naturedly meddlesome with too much privilege and too little vocation. But for all the advantages bestowed upon her, Emma is a restless creature who offsets her longings and loneliness with her preoccupation at playing cupid.

What I like most about her the most is the self-assured tone of her opinions, however foolhardy, and her delightful lack of enthusiasm for matrimony -- a refreshing departure from the average Victorian lady.

Not so surprisingly, there have been several cinematic interpretations of this 19th century heroine essayed with marvelous distinction by the likes of Gwyneth Paltrow, Kate Beckinsale and Romola Garai.

Circa 2010 is a brand new era altogether. And voicing one's opinion or opting for a live-in is no biggie for the fairer sex of Highbury or Delhi. Matchmaking, even so, hasn't lost any of its credibility amidst all this progress and forms the singularly retained essence of director Rajshree Ojha's adaptation of Austen's frothy classic.

And so Emma becomes a Beetle-steering Aisha (Sonam Kapoor) and fashion wears the face of feminism. Considering her sleekly-documented reputation as a star with a penchant for haute couture and vintage pieces, Sonam Kapoor is tailor-made to portray a dazzling cross between Cher Horowitz and Blair Waldorf. An astute knowledge of style is, perhaps, the only genuine counsel she's able to impart to her pet-project, a daft and dowdy Shefali (Amrita Puri) along with the equally (if not more) chic BFF Pinky Bose (Ira Dubey).

Unlike Kapoor who's trapped in the middle, limited by a screenplay (Devika Bhagat) that doesn't ask her tremendous talent for more than a disapproving raised brow or babyish pout, Puri and Dubey have a ball playing the quirky gals on either side of the spectrum. If Puri goes wild by means of her hilarious Punju accent, Dubey is all edge and spice with her fiery sarcasm and steady cattiness.

Boys aren't a neglected lot in this relentless chick flick. To begin with, I cannot imagine a better Knightley than Abhay Deol. Like Aamir Khan, he's fast acquiring the image of someone whose films are something to look forward to. And though it's a relatively uncomplicated role for the actor, it's cool to watch him out of his comfort zone, namely unconventional cinema. If Deol's just downright irresistible, Cyrus Sahukar lends his bumbling Randhir Gambhir a sense of awkward realism making his antics both -- believable and droll. He says some of the funniest lines with such unrehearsed spontaneity, it's most chuckle-worthy.

Ojha's desi Emma dumps the mysterious subplot involving Frank Churchill-Jane Fairfax (the objects of jealousy for both Sonam and Abhay's characters), which means Arunoday Singh (doesn't have a grabbing screen presence) and Lisa Haydon (so hot, so wasted) are as imperative to the plot as Sonam's fancy Dior-dominated wardrobe. Instead she incorporates a teaspoon of Pride and Prejudice that involves an unexpected romantic compromise between two unlikely protagonists. I rather stay ambiguous about this than risk a spoiler.

Long before Ojha conceived the idea of a modern-day remake, Hollywood writer-director Amy Heckerling humorously reworked Austen's book to helm Clueless around a spoilt, wealthy girl from Beverly Hills, high on Alicia Silverstone's breakthrough performance and a still-popular lingo of 'As if's and 'Like, ever'.  What made this contemporary edition such a hit is its remarkably witty script that's got enough cheek and pizzazz to make light of the very superficiality it embarks on. A quality amiss in Aisha. 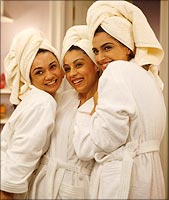 In its source material, Emma shares an unusually close bond with her father who cannot bear to see her out of his sight even for a day. Because of her confined, sheltered existence she's perpetually on the lookout for new endeavours and matchmaking fits the description perfectly.

It's given that this sort of set-up doesn't fit in today's milieu and that is why Aisha's joblessness doesn't make much sense as opposed to Clueless wherein Heckerling justifies and mocks the inactivity by writing her as teenager in high school.

If one tries to dissociate Aisha from Austen and perceive it as a standalone rom-com, far less faults are to be found. There's much too freshness in its texture, expressions and candour to not be endeared. For those who've read the book, a lot of missing sub-text in the film needs to be drawn from memory. For those who haven't, focus on the glamour.

Beautifully shot (Diego Rodriguez) and packaged (Shruti Gupte) with a fabulous soundtrack (Amit Trivedi) and superlative ensemble cast (including an excellent M K Raina, Anuradha Patel), Aisha, quite often, gets caught up in a self-created tangle of brand-led vanity to ever let one get acquainted to its leading lady.

The who's who of Aisha