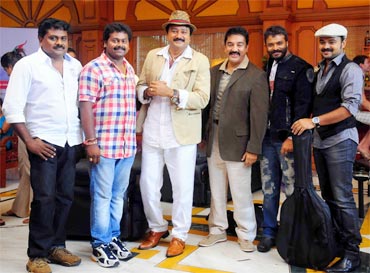 Two hits in a row (Ivar Vivahitharayal and Happy Husbands) have made director Saji Surendran a hot property in Malayalam.

With a casting coup of sorts, he is vying to repeat the success streak with Four Friends.

Jayaram, Jayasurya, Kunchacko Boban and Meera Jasmine play a gang, who are on a journey to make their life more meaningful. The film has hogged headlines of late for two reasons, one being the presence of Kamal Haasan in a guest role and the second being the use of the remixed version of the yesteryear song from Sholay, Yeh dosti hum nahin

Krishna Poojappura, who had scripted Saji's previous films, is the scenarist once again. "This film is pretty different from the earlier two, though there is an underlying humorous tone in the narration, we are handling a rather serious theme," says Saji.

The shooting of the film is being completed at Alappuzha, Kochi, Gundalpettu, Malaysia and Singapore.

The portion involving Kamal Haasan was completed in a single day, at Chennai.

"I feel extremely fortunate to have received this opportunity to direct the legend. He was so cordial and friendly," says Saji.

Four Friends is being produced under the banner of Mulakupadam Films. The cinematographer is Anil Nair and the music director is M Jayachandran.