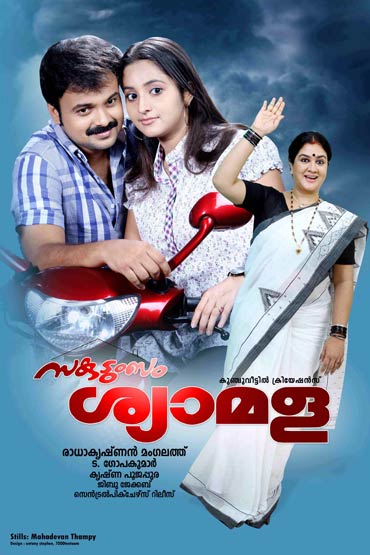 After the success of director Saji Surendran's Ivar Vivahitharayal and Happy Husbands, quite a few TV serial directors are making their way to the big screen.

The latest entrant is director Radhakrishnan Mangalath, who is ready with his debut Malayalam film, Sakudumbam Shyamala (Shyamala with her family).

Urvashi, Kunchacko Boban and Bhama play the lead roles in the film. The others in the cast include Nedumudi Venu, Suraj Venjarammoodu, Sai Kumar, Maniyanpillai Raju and Geetha Vijayan.

Urvashi plays Shyamala, an ambitious woman, who ditch her rich family to elope with her lover. Now, her son Adarsh (Kunchacko Boban) works for a TV channel and Shyamala plans to get him married to a rich man's daughter. But he falls in love with his colleague, Vandana (Bhama). Vandana belongs to a middle class family. Shyamala meanwhile enters politics and becomes quite successful in the field.

Krishna Poojappura, who had scripted Ivar Vivahitharayal and Happy Husbands, is the scenarist. Jibu Jacob is the cinematographer and M G Sreekumar the music director.

The shooting of the film has been completed at various locations in Thiruvananthapuram.

Sakudumbam Shyamala is being made under the banner of Kunjuveettil Creations.

Hanging out with Deepika, Neil