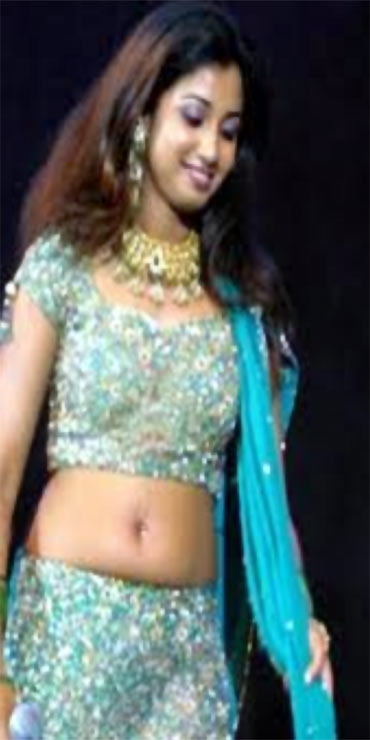 Reader Perdy Mohindru from Auckland, New Zealand, sent us this article and picture of Shreya Ghoshal's concert in New Zealand recently. Feel free to mail us your write-ups, videos and photographs to moviesdesk@rediff.co.in

Shreya captured the hearts of New Zealanders with her awesome melodious performance at the packed Telstra Pacific events centre, Auckland, on August 20.

Her voice was a musical treat that quickly struck a chord with the large Indian and Fijian community settled there, and revived nostalgic memories of their homeland.

The evening kicked off with Shreya's soulful rendition of Tujh Me Rab Dikhta Hai followed by the peppy track Bahaara from the film, I Hate Luv Storys.

But the track that really touched the hearts of the crowd was the very romantic Teri Ore (Singh is Kinng). One can still remember how beautifully this song was picturised on Katrina Kaif and Akshay Kumar.

One would have liked her to sing more of the very catchy Tu Bas De De Mera Saath (Gangster) while Pal Har Pal (Parineeta) was rendered perfectly. The audience really lapped it up.

But the song that really got the crowd on their feet was the very vibrant and peppy Ye Ishq Haaye from the Kareena Kapoor starrer Jab We Met, and Bairi Piya and Dola Re Dola from Devdas.

Post break, Shreya lit the stage with Barso Re Megha (Guru). Aucklanders enjoyed that, as the showers were already in full swing.

Zoobi Doobi from the blockbuster 3 Idiots really got the crowd going. Once again Shreya's vocals were mindblowing. I especially enjoyed the small additions to the song.

She followed it up with the very simple and sweet yet exuberant track, Hum to Aise He Bhaiya (Laga Chunari Mein Daag). The audience liked the rendition of Dhum Tana (Om Shanti Om) while the teenagers loved her flawless rendition of the very sexy track Jaagi Jaagi Soyi Na Me Saari Raat (Prince).

Shreya did a medley of catchy songs starting with Tera Mera Milna, Bring It On, Tumhe Jo Maine Dekha and Om Shanti Om. The youth in the galleries loved the song All Cool Boyz.

Shreya soon switched gears by singing the very romantic yet mystical number Bepanah Pyaar He from Krishna Cottage and a Marathi song.

In the last segment of the show, she paid tribute to legendary singer Lata Mangeshkar by singing Tere Bina Zindagi Se Koi Shikva Nahin from the superhit movie Aandhi.One could see a lot of older people getting nostalgic with this one. She introduced all her musicians and then ended the musical night with Dola Re and Ye Ishq Haiye.

All in all, it was a superb show organised by ABC Entertainment and Perfect Harmony Productions. Shreya captivated the music-loving fraternity of New Zealand with her melodious, flawless and extremely soothing vocal renditions.

The magical web that she cast on the audience kept them entranced for almost four hours.