Avoid Hello Darling at all cost 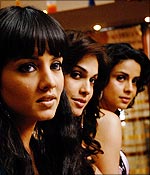 Preeti Arora reviews Hello Darling. Comedy or a spoof or a farce, whatever the director was aiming at is ideally meant to have you falling out of your seat with laughter. Now that is a target very few succeed in achieving. But one would believe with a decent script you would at least smile a few times through the film. Or maybe even manage a giggle here and there. In Hello Darling all the audience could be heard doing was gnashing their teeth in anger.

The film is like a badly cooked stew where the writers were so busy tossing different ingredients into the pot they never really had time or the inclination to think about what their concoction would ultimately turn into.

Sachin Yardi and Pankaj Trivedi have obviously been inspired by the popular Hollywood comedy Nine to Five (1980). Celina Jaitley (Candy) is having an affair with her boss Javed Jaffrey (Hardik). But she doesn't realise she's the laughing stock of the entire office as Javed brags about their affair with reckless abandon. Celina teams up with Gul Panag (Mansi) the dignified corporate lady and Eesha Koppikar (Satvati), a newbie who has just come on board so that the lazy, good for nothing, tyrannical sexist boss can be taught a lesson once and for all.

So these three women have a 'great' idea on their hands but set about executing it in the most cliched and ridiculous fashion, making stupid mistakes from the first scene to the last. And the script writer and the director in their ludicrous attempts to get a laugh, make everybody out to be buffoons whether it is doctors -- who pronounce a patient as dead even though he's hale and hearty -- or the office peon, who places rat poison right next to the sugar bowl on the kitchen table.

Just when you are coming to terms with the general air of silliness, the director brings in the gay angle, the eunuchs begging at street corners and Javed Jaffrey running across the city in a pink nightie.

Divya Dutta (Purvi) is Javed's long-suffering wife who decides to seek professional help. So enters Seema Biswas as Phoolan Tai running an organisation called Pati Sudharak Samiti where husbands are beaten and coerced into redirecting their libido strictly at their wives and ignoring the rest of womankind. There is also an entire sequence about the woman servants in the locality landing up at Javed's house to complain about his errant ways. Any guesses about what or rather who was the real-life inspiration behind this incident?

Since these women have enough on their hands you hope the boss learns his lesson fast and the ordeal will end for the entire audience. But no, the director also wants to tell us about how the film isn't simply about sexual harassment, it's also about gender equality and consideration for working mothers. Phew, now that is really too much masala for a single dish.

Pritam's music doesn't help the film but could bring on a migraine if one is susceptible to them. Searching and seeking desperately for a redeeming feature there is just one; the entire cast who have tried their best to salvage the film through pithy, half-baked situations, dialogues laced with sexual innuendoes and downright in-your-face vulgarity. Although in a couple of scenes Gul Panag has the 'Help, what am I doing here?' look.

Hello Darling needs to be avoided at all costs. Unless of course gnashing your teeth and wasting your money on mindless, tedious comedy is your favourite hobby.