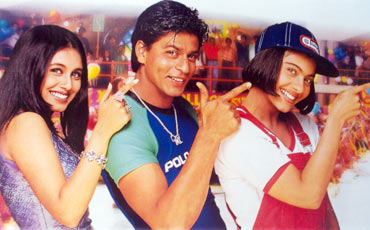 Reader Pramod Kumar shares with us a blooper that he spotted in the movie Kuch Kuch Hota Hai.

In Kuch Kuch Hota Hai, Tina (Rani Mukerji) writes letters to her infant daughter Anjali while on her deathbed, and hands them over to her mother-in-law.

The last letter was supposed to be read on Anjali's eighth birthday and it contained the details of Rahul's (Shah Rukh Khan) affair with Anjali (Kajol). Tina requests her daughter to find her and subsequently arrange their marriage. Now there are several questions:

* How does Tina know that Anjali will remain unmarried for exactly eight years, as she is shown getting engaged to Salman Khan in the ninth year?

* Why didn't Tina tell her mother-in-law to search for Anjali and get her married with Rahul? After all, she is only a child and so it stands to reason that an adult is more competent for the job.

* How can Tina assume that Rahul won't remarry someone else in those eight years?

Also Read: What is the secret of Ajay Devgn, Kangna's youthfulness?