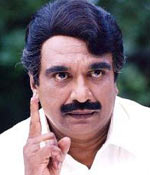 Veteran Malayalam actor and director 'Cochin' Haneefa died of a liver ailment at a private hospital in Chennai today, family sources said. He was 61.

He is survived by his wife and two children.

Though mostly cast as villain in the initial stages of his career, he later excelled in comedy. He acted in over 300 films since his debut in Mamangam in 1979.

Haneefa's real name was Salim Ahmed. He started his acting career through stage group, Kochin Kalabhavan. Some of his directorial films like Valsalyam were box office hits and won critical acclaim.

Tamil Nadu Chief Minister M Karunanidhi expressed shock at his death and offered condolences to the family. "He has acted in many films, including Pasa Paravaigal, for which I had penned the dialogue. He used to be very polite and respectful," Karunanidhi said.

"He was a great human being, a gifted actor and a good director," veteran actress Kaviyur Ponnamma said.

"As a comedian, Haneefa stood out on account of his ease and originality," freelance film historian Balagopalan said.

The Kamal Haasan-starrer Mahanadi gave him a major break. He also essayed a role in the Rajnikanth-starrer, Sivaji-The Boss. He was a regular in Tamil actor Ajith's films. His last Tamil movie was Vettaikkaran. He acted with most Malayalam actors from the late Prem Nazir to Jayasurya and Prithviraj.

Haneefa is the third major Malayalam star to have passed away in recent months after Murali and Rajan P Dev.