News
Business
Movies
Sports
Cricket
Get Ahead
Money Tips
Shopping
Sign in  |  Create a Rediffmail account
Rediff.com  » Movies » I am what I am because of Mumbai: SRK

I am what I am because of Mumbai: SRK 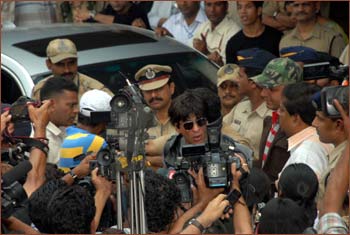 Shah Rukh Khan, who has been been under attack from Shiv Sena on his views on the inclusion of Pakistani players in the Indian Premier League, returned to Mumbai from London on Saturday.

He said it was sad that his remarks have been misconstrued but ruled out meeting Shiv Sena chief Bal Thackeray on his own to sort out the controversy.

"I think what I said has been misconstrued. I am pro good relationship with countries. I am not pro some other country and not my own country. How is it possible?," he told media persons at the airport.

Asked if he would go to Thackeray's home Matoshree to explain his position, the actor said Bal Thackeray was a senior leader and he had gone to his residence whenever he was called.

"I have been there so often. Yes, I would like to go and have a drink with him. But on this matter, I don't see... there is no reason for going and asking. But if my stand needs to be explained to someone, I have already done it. I don't think there is an issue on that front," Khan said.

The 44-year-old actor, whose upcoming film My Name Is Khan faces threat from Sena supporters, also added: "If there is any misunderstanding, let's be gracious and let's talk it out."

Against the backdrop of the controversy over his 'Mumbai belongs to all Indians' stand, Khan said, "I only said what every Indian should say. It is in the constitution. I don't want to use big words. If I say anything it will be misconstrued and turned around.

"I am what I am because of Mumbai and I would like everyone in Mumbai to be happy. I think what is happening is very unfortunate. I think all the groups also want Mumbaikars to be happy. Then why create this kind of atmosphere?"

On why his team Kolkata Knight Riders did not pick up Pakistani players, the megastar said, "There was only one slot available and nobody told us to take or not take Pakistani players. We also have to take into consideration the prevailing atmosphere."

Do you support the My Name Is Khan release on February 12, which may run into trouble, thanks to this controversy? Voice your thoughts here!

In the picture: Mediapersons and police personnel gather around Shah Rukh Khan at the airport. Photograph: Pradeep Bandekar

SRK a 'traitor' but won't oppose his film: Sena