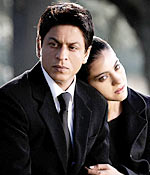 A Shah Rukh Khan movie release is always a big event. And if the film is directed by Karan Johar and co-stars the heroine who looks best opposite SRK -- Kajol -- it's one of the biggest events of the year.

That makes this year's Valentine's Day release -- My Name Is Khan -- very exciting.

SRK, Kajol and Karan Johar will promote My Name Is Khan in New York on February 1.

And to catch them in action is Aseem Chhabra who will keep readers updated as the stars speak. Simply log on to Aseem's MyPage and catch the action live!