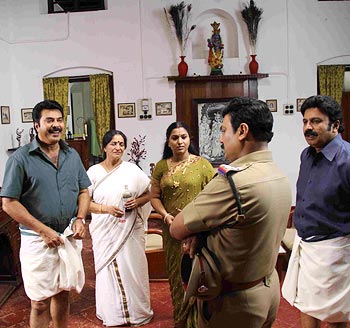 This Vishu will see Mammootty in Pramani as Viswanatha Panicker, a corrupt panchayat president of Thazheppadam village.

The Malayalam film is written and directed by B Unnikrishnan. Shooting is currently underway at various locations in Kochi and Alappuzha.

Sneha plays the heroine in Pramani. Her role is that of Janaki, the panchayat secretary who exposes the corruption. Sneha has earlier played Mammootty's heroine in the hit film, Thuruppugulan. She is also the heroine in Vandematharam, which will also star Arjun as the other hero besides Mammootty. Siddique, Suresh Krishna, Fahadh, Janaradhanan and Kaviyoor Ponnamma include the rest of the cast.

Pramani is being produced by B C Joshi under the banner of Soorya Cinema.

Review: What made Mammootty take up Chattanmbinadu