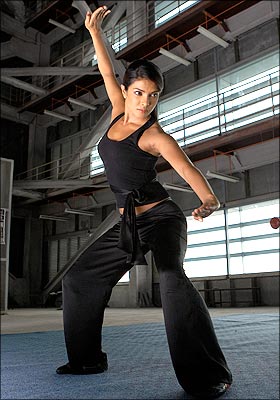 It is confirmed. Priyanka Chopra is all set to reprise her role of femme fatale Roma in the sequel to Farhan Akhtar's 2006 Don-The Chase Begins Again.

Though it was always on cards that Shah Rukh Khan would feature in Don 2 which is expected to pick up from where the remake of the Amitabh Bachchan starrer Don left, there was always mystery around the presence of the leading lady in the film.

However, Chopra, who recently won the National Award for the best actress for her role in Fashion, has confirmed her presence in the sequel.

"Yes, I am doing Don 2. Ever since I worked in the first movie, I was looking forward to being on board for the sequel as well. It would be good to be a part of Don 2 as it is an action thriller," Chopra told PTI from the US where she is currently shooting with Ranbir Kapoor for Siddharth Anand's Anjaana Anjaani.

Chopra reportedly learnt martial arts for her role of revenge thirsty Roma in the film, who tries to woo Don, played by Shah Rukh, to avenge the death of her sister.

Her recent release Pyaar Impossible may have failed to take off at the box office but the 27-year-old actress is looking forward to an eventful year ahead. She is busy wrapping up Anjaana Anjaani and will begin shooting for Vishal Bharadwaj's next film after Kaminey. "I am really excited about Vishalji's next film. After Kaminey, I am so keen to get on his sets once again," Priyanka said.

Though there are rumours that she is playing the role of a woman who marries seven different men, an official confirmation is yet to come in. However, it is certain that one of the men in the film would be Malayalam star and National Award winner Mohanlal.

Priyanka, however, will not be the leading lady in Tarun Mansukhani's sequel to Dostana, which made waves when released in 2008. The film is all set to get rolling this year.

"No, I am not the leading lady of Dostana 2. My story had ended in Dostana and there was no point being paired with any of the boys (Abhishek Bachchan and John Abraham) in the sequel. But yes, I will certainly be there in a special appearance and would return for a short while in the film as their friend," she said.

Great Hindi Movies, Coming Up in 2010