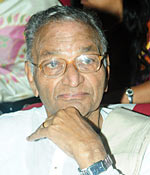 Veteran Telugu actor Gummadi Venkateswara Rao, died of multiple organ failure at a hospital in Hyderabad on Tuesday night. He was 83.

Rao was suffering from diabetes, heart disease and other age-related problems and was admitted a few days ago to the hospital, where he breathed his last, doctors attending on him said on Wednesday.

Born at Ravikampadu village in Guntur district, Rao, popularly known as 'Gummadi' made his film debut in early 1950s and went on to act in over 500 films.

In a career spanning over five decades he teamed up as a co-star with N T Rama Rao and Akkineni Nageswara Rao in several films. His portrayal as 'Bheeshma', 'Dashratha' and 'Balram' in various mythological films won him many laurels.

Though younger to NTR, Gummadi played the role of his father and elder brother in several movies. He was the recipient of Andhra Pradesh government's prestigious Raghupathi Venkaiah Award and various other awards.

Chief Minister K Rosaiah and a number of film personalities visited the hospital to pay their last tributes to the noted actor. Gummadi is survived by seven children. His funeral will be held in Hyderabad on Thursday, family sources said.

NTR Jr pleads to save movie from Telangana fury