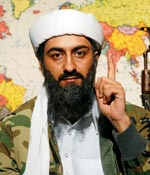 Sometimes one's relationship with the movies gets a little strained. Week after week of watching the same item numbers, the snazzy European locations and stilted dialogues catering to the NRIs create a sense of fatigue and boredom. And the film buff almost makes a decision to take a breather and stay away for a while.

But then comes a film like Tere Bin Laden and hope is rekindled all over again.

Recently, we had My Name is Khan which dealt with the tragic aftermath of the 9/11 disaster for ordinary citizens, especially those belonging to the minority community. But debut director Abhishek Sharma's Tere Bin Laden is a film which reveals how ordinary citizens wanting to reside in America must either give up on their ambitions or resort to drastic measures.

Tere Bin Laden is, however, free of drama and emotion. It's a satire about all those wanting to set foot on the promised land. And it works.

Our protagonist Ali Zafar has spent most of the last decade living in Karachi with one single-minded obsession -- getting to the United States of America. He believes his future lies there. He will entertain even the most harebrained scheme as long as it takes him closer to his destination.

Meanwhile, Ali plods through his days working as a reporter for Danka TV, an almost unknown news channel run by Majeed. 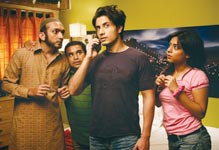 On one occasion, when Majeed sends him to cover a rooster crowing competition, Ali meets a chicken farm owner called Noora (Pradhuman Singh), who is an almost perfect lookalike of the most wanted criminal Osama Bin Laden. Ali sees this as an opportunity to make a quick buck, without visualising the far-reaching consequences of his actions.

Since great schemes cannot be executed single-handedly, Ali sets out to cement a team who can help him. There is Gul, Ali's assistant and cameraman who doesn't seem to have an ambitious bone in his body. But he supports Ali unhesitatingly. Gul manages to evoke a laugh merely on the basis of his body language and expressions.

There's Zoya (Sugandha Singh) a veteran make-up artist who dreams of turning entrepreneur. Qureshi is a radio jockey who hates America and all things American. But his thought processes are rather random and not derived from a consistent political ideology.

The opening scene in the film is one where a news caster stands at the edge of the runaway, making an announcement. A plane takes off and the newscaster wig flies off.

Even as you laugh and continue to laugh your way through the film, one realises the director was very clear in his intentions -- there is so much humour in our daily lives, let's take some of it onto the big screen. Like Laskar-e-Amreeka a shady immigration agency with Rajendra Sethi playing the dubious owner. 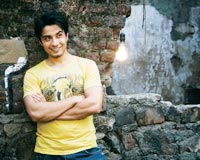 But Tere Bin Laden is not just a film about slapstick jokes and naughty humour. Through all the gags and jokes, one is forced to accept how willingly we compromise on our ideals and values to attain our cherished goals; how we persist in giving personal gain more importance than building a cohesive society. There are some constant digs at America and their imperialist policies but the one-liners are sharp and cleverly woven into the script.

The dialect is authentic, with a peculiar mix of Punjabi and Hindi, liberally sprinkled with a lot of cuss words and swearing. Noora, the fake Osama with his chicken obsession, really sounds like a farmer who has been born and brought up in rural Pakistan.

There is no attempt to cater to the NRIs, and a sub-titled TBL will probably fall flat on its face simply because the desi humour will be lost in translation.

If the film suffers it is mainly because of the budgetary constraints. Most of the film is restricted to the interiors as it probably wasn't possible to shoot the film in Pakistan. With better sets and a wider variety of locations, the film would have been a masterpiece.

Tere Bin Laden not to be released in Pakistan