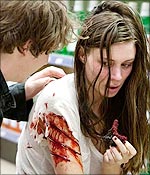 You sleep, you dream and you die. This forms the essence of Samuel Bayer's directorial debut A Nightmare On Elm Street. Prior to this Samuel Bayer boasts of a repertoire music videos including Nirvana's Smells Like Teen Spirit.

A heap of expectations were already set prior to the release for it being a remake of horror specialist Wes Craven's 1984 classic of the same name. Twenty six years later, the star cast comprises Jackie Earle Haley, Kyle Gallner, Rooney Mara, Katie Cassidy, Thomas Dekker and Kellan Lutz.

For those oblivious to the original movie, five high school friends mysteriously share a common nightmare in which a stranger kills or makes an effort to kill them brutally. This stranger wears a hat that covers a charred and spooky face. His weapon of choice is sharp knives which protrude from his fingers and with which he slashes these friends in their dreams. The situation turns awry when these nightmares begin to turn into reality.

Nancy (Rooney Mara) and Quentin (Kyle Gallner) are baffled to see their friends dying one after another. Anticipating a similar fate, both of them, dazed and sleep-deprived set out to solve this mysterious misery.

On rummaging through a pile of old photographs, Nancy is surprised to discover a group photograph of all five friends dating back to preschool days. But she could not remember meeting any of them back then. While at the same time, Spooky Freddy continues to haunt both Nancy and Quentin in the form of nightmares. To make matters worse, insomnia leads to both Nancy and Quentin dreaming while awake with dire consequences.

Interesting plot, isn't it? In spite of this, the movie lumbers in most of the scenes. Only the background score emerges victorious in causing a chill down your spine.

Monotony sets in, as things become too obvious. Okay, he just saw the dream, so he is dying. Okay she just had the nightmare, so it's her turn now. This Spooky Freddy guy isn't scary enough. Even he is guilty of monotony by brandishing his fingers-turned-knives time and time again. 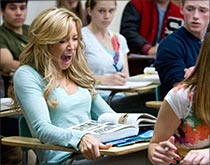 Also, the switch from dream sequences to real sequences can bore you. These guys from Elm Street sure dream a lot.

The movie also includes a run of the mill mirror scene, typical of horror movies. The protagonist runs the tap, bends down and splashes water on her face to discover someone standing behind her. Mirrors have made a remarkable contribution to the genre of horror movies.

Disappointingly, there aren't enough or in fact there isn't any scene in this remake of A Nightmare On Elm Street to keep you on the edge of your seat.

Fans of horror movies can give this a try.

Ishqiya: An idyllic tale of love and lies