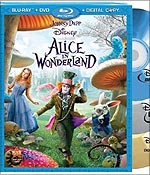 In Tim Burton's Alice in Wonderland, the Lewis Carroll classic tale recently got a new twist thanks to the sumptuous imagination of the filmmaker and the marketing skills of the Disney folks.

And audiences loved the 3D film so much they turned it into a leggy hit, making it a $1 billion plus grossing mega phenomenon. The seventh film to achieve the distinction, the $200 million costing adventure is now available in DVD and Blu-ray versions. A wonderful buy is 3-disc combo pack that includes Blu-ray, DVD and digital copy.

One should not be surprised if the combo and single disc versions become one of the top-selling items in recent history. Despite the slump in the DVD market, the discs should fly high because of the repeat value of the Burton's film.

Though greeted by a few negative reviews when it opened first in London, and then worldwide, the film triumphed because of the strong word of mouth and a substantial number of glowing reviews.

Burton, working with Johnny Depp for the seventh time since 1990's Edward Scissorhands, has made a visually stunning and often emotionally stirring film which has become his highest grossing work.

Among the film's highlight is Mia Wasikowska playing a 19-year-old Alice who returns to the Wonderland (called Underland in the film) of her childhood dreams. In the Carroll books she is a seven-year-old and is on a very different mission. In the new film, she wants to find out her true identity and also end the wicked reign of the Red Queen.

Depp plays her protector, the Mad Hatter. Despite her enchanting presence, it is impossible to ignore Depp's powerful performance. The film's appeal is also enhanced by the acting of Anne Hathaway as the White Queen and Helena Bonham Carter as the multi-headed Red Queen. The contribution of Miachel Sheen as the White Rabbit has to be acknowledged, too.

This is not our third-grade teacher's version, audiences who have loved the 19th century classics Alice's Adventures in Wonderland and Through the Looking-Glass had known long before the film's release. And yet the film's imaginative process and dazzling production values combined with superb acting made the film instantly appealing.

In the script that Linda Woolverton (The Lion King, Beauty and the Beast) the drastically revised story is dark and humorous and full of surprising twists.

Alice refuses to marry the man her parents have chosen her  So when the White Rabbit  interrupts her engagement party, she starts her mission. Among the denizens of the Underland, she also has to deal with the Red Queen's Knave of Hearts (Crispin Glover),  Absolem the caterpillar (Alan Rickman), and the Cheshire cat (Stephen Fry), and the unforgettable Jabberwocky (Sir Christopher Lee).

Even the critics who did not care for the movie much could not help but praise Depp.

'Depp is a marvel as the Hatter, orange hair sprouting as a result of poisoning from the mercury used in making hats,' wrote Peter Travers in Rolling Stone. 'He handles Carroll's language so well that you wish more of it had slipped into the script. Love for Alice shines out of his eyes.'

Claudia Puig is among many who loved the film. 'For those who were wowed with the look of Avatar but put off by the wooden characters and clunky dialogue, now there's Alice in all her "muchness,."; she wrote in USA Today.

'Alice in Wonderland's menagerie of characters range from mildly loopy to certifiably insane. But they're immensely fun, and what they have to say has charm and verve.'

She added: 'What is often forgotten in the more sanitized and sweet versions of Alice in Wonderland is that Carroll's story is essentially about growing up, which entails some dark experiences. Burton's distinctive cinematic style makes this eclectic fantasy -- infused with both dark and light -- a dynamic marriage of original material and modern filmmaker.'

It would be fun to watch on DVD the first Alice in Wonderland, also from Disney, and then the smart, subversive by Burton.