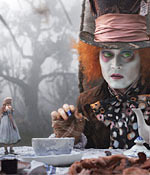 Not unlike the finest early morning dreams, some teams are too good to be true.

Disney backing a revisionist take on Lewis Carroll's Alice's Adventures In Wonderland, with mad scientist Tim Burton at the helm?

Starring his marvelous muse Johnny Depp as the Mad Hatter, Helena Bonham Carter as the Red Queen and Anne Hathaway as her frippery White counterpart?

Danny Elfman scoring, of course, with names like Alan Rickman and Stephen Fry among the all-star voice cast?

Too good to be true, we drooled. And Burton proved us right, serving us an undeniably pretty big of fluff that disappoints at almost every turn. One big 3D pastry, made of well-cut cardboard.

The new Alice In Wonderland -- not a patch on Disney's 1951 animated classic of the same name, that lovely, psychedelic ode to innocence -- tries too hard to weave the absurd magic bits that make Carroll's Alice so special into a coherent plotline, and while it succeeds somewhat at this, a pedestrian and basic plotline robs Alice of all that's special.

Gone is the inspired lunacy and subversion, and in comes a story that could suit Percy Jackson or Shrek. It's not all that surprising coming from Disney today, but from Burton? It breaks your bloody heart, this grinning film that doesn't have half enough cat. Or grin.

The film is about a nineteen-year-old Alice, constricted by a stuffy family. Her imaginative father is long gone, and the girl finds her imagination blinkered at every turn, and is now expected to tell her wealthy suitor that she will indeed marry him. Yet there's a pesky white rabbit that darts from hedge to hedge, daring our blonde heroine to follow him. She does, and there's that rabbithole...

The rest is tragically schlocky. Burton's version takes Alice to a dank, murky world called Underland, and then appears a chosen-one plot so painfully cliched that one wonders if the director just doesn't care for his subject enough, choosing instead to spend his time languishing over the details in his macabre new world.

There's hardly enough whimsy, and while one notices trademark Burton flourishes -- that tree from Big Fish is there, for example, and the only reason the Mad Hatter isn't Beetlejuice is because even Depp daren't step into Michael Keaton's zebra-striped trousers -- the film is just too dashed simplistic. Pixar wouldn't have made it, for example, because it was too basic.

Credit where its due, Mia Wasikowska is quite startling in the title role. Her Alice goes from being befuddled to brave, and her Narnia-like arc is traced quite impressively by the young actress, strikingly bestowing the role with the extreme wonderment it needs. She's wide-eyed yet relatable, a strange girl forever alienated from her world by her own imagination. This is, indeed, a young heroine you root for.

Helena Bonham Carter is inevitably stellar, carrying a head three times her size and doing it with delicious flair. The actress channels a lot of Blackadder II's Queen Elizabeth I, played so magnificently by Miranda Richardson, but Carter's is a special talent indeed, and the actress remains the highlight of her fortunate husband's films.

A peculiar casting decision is Crispin Glover -- George McFly from Back To The Future -- as the vile Knave Of Hearts, but this pays off, creating a fine, if harmless, baddie. Getting Christopher Lee to voice the Jabberwocky just seems too typical to even comment on. Rickman, playing Absolem the oracular blue caterpillar, has the voice for the job while Fry's Cheshire Cat doesn't appear as often as one would expect.

Because the leading man, you see, is Johnny Depp. Burton and Depp take the Mad Hatter and give him a disturbing little back-story (though no fathers were brought in to explain things this time, thank heavens) and try to make sense of him.

Bad idea, adding up to Depp doing Vincent Price and Beetlejuice with a flutter of Jack Sparrow every now and then, a hacky performance from a great actor who has begun to pull too many faces and take himself too unseriously. If there exists a bottle marked 'Drink Me And Play A Real Person,' Depp needs to have at it now. This is one of his most boring performances, a true disappointment.

Visually, the film is stunning, yet leaves you wanting more. There is precious little light, and Burton's Underland might have tremendous, macabre detailing -- the card-soldiers of Hearts are quite lovely, for instance -- it doesn't pop like it should.

Coming from a formal ball, Alice's entry into Underland seems more like she went backwards, and hit the dirt roads of Kansas instead of escaping into fantastical fancy. Also, perhaps James Cameron's spoilt us silly, but the 3D here just distracts, making things drearier than they are, and I'd seriously recommend watching this in nice clean 2D instead.

Alice In Wonderland has a fine heroine, some smashing bit parts and a lot to drool over, but it never quite makes an emotional impact, coming across as miserably uninspired. The most entertaining sequence, in telltale fact, is the portion where Alice flashbacks to the first time she was there, painting white roses red. If only.

I'm certain Tim Burton's writing desk is jet-black and has wings, but the man has failed in getting this film to fly. Alice deserves a lot more.

The best of Johnny Depp