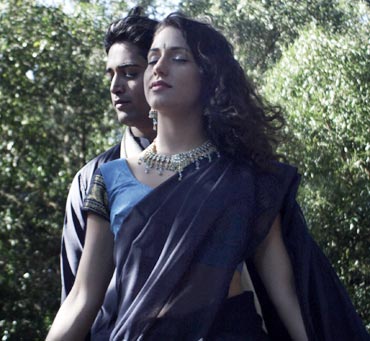 Karma and destiny are generally considered high philosophical concepts and though they figure in daily conversations and life, it's not often that films are solely made on them.

Sesh Adivi, a filmmaker based in the United States, is making one such film called Karma in Telugu. He has donned the hat of an actor too along with Jade Tailor.

The film is presented by Saikiran Adivi (director of Vinayakudu and Village lo Vinayakudu) and produced by Bhavani Adivi, Harsh Singh and Sher Ali. The film is shot entirely in the US.

A car accident in 2007 which Sesh survived miraculously set him thinking about karma. "The car was completely shattered but I did not even have a broken bone. I wondered how I survived. I also thought of my karma -- what caused the good luck which helped me survive. This set me thinking about the reality and the world. So I worked on the concepts," says Sesh who categorises Karma as "a supernatural thriller with a romantic angle."

As the film is shot in the US, he says, "I had grown up in scenic areas. So I wanted to shoot at Carmel and Bigsor."

Sesh has attended a film school in San Francisco where he studied direction and acting. He has written and directed many plays and short films before debuting with Karma. Incidentally, Sesh has won Mr India San Francisco and Mr India Waves titles.

The story is about Padma, whose father was murdered by a Brahmin priest who was also a drug peddler, who settled in Shamrock with her mother. Years later after her mother death, Padma, who is a pre-medical student by now, meets a mysterious stranger Dev. Being her case-study, Dev 'shows' his supernatural abilities and Padma falls in love with him. Though she tries to understand him on a rational basis only as a science student, she is unable to explain Dev's strange and inexplicable actions.

Another interesting aspect of the film is its music score composed by three international American music directors -- Peter One (hip-hop producer who has worked with over 100 hip-hop artists), Leland Thunes (experienced DJ and teacher of music well versed in Jazz, European classical and Indian Fusion) and Justin Durban aka Edgen (who has scored music for several Hollywood films and trailers like Taking Lives, Firecracker, Harry Potter- Order of the Phoenix, Hulk and Mummy 3.

James Laxton is the cinematographer of the film which is shot completely in RED One system and has an all American technical crew. Karma is likely to release in July end or early August.