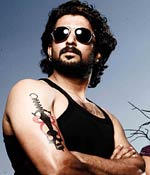 You loved him as Aditya (Malebillu) and Kishore (Preeti illada mele) and hated him as Jeevan (Rathasapthami).

But that is Kannada television industry's poster boy Dilip Raj for you. The actor who has acted in popular soaps like Janani, Ardha Satya, Rangoli, Kumkuma Baghya, Mangalya and Preetigaagi... talks about his journey to the small screen and his slowly yet steadily progressing filmograph. Excerpts:

How did you get into television?

During my college days, I was a dancer and used to choreograph dance sequences for students participating in culture fests. I had made a lot of friends in these fests and one of them requested me to be a part of his play. They were looking for someone who could perform stylised movements as the character demanded so. But it so happened that the person who was to play the lead role backed out at the last minute and I volunteered to play the part. I went on to win the third best actor award in that fest for my performance. This egged me on to join amateur theatre.

I was associated with theatre groups like Nataranga and Drishti. In these circles, I came in contact with theatre and television actress Nanditha who introduced me to television. I did Kambada Mane, a tele film followed by a serial, Janani, where I played actress Bharti Vishnuvardhan's grandson. By then I had finished my degree and didn't know what else to do but act.

Which role of yours is closest to you?

It has to be Aditya's in Malebillu. Aditya, like me is a cool guy. He is someone who believed in quality work and never let small issues bother him.

What are your current television projects?

I'm working in Rathasapthami, a serial based on a true incident. I play Jeevan, a negative character. He is married to a blind girl. He is a schemer who goes about harming everyone who comes close to understanding his dubious ways.

Why did you take a break from television serials when you were in demand?

When I was doing Kumkuma Bhagya I got a call from the makers of the film Boyfriend to do a role. The team was still on the Iook out for a hero but when I went to attend the mahurat of the film, the press mistook me to be the hero. The reports suggested that I should be cast in the lead and I bagged the role. The film was good and the songs were also nice, only the release wasn't planned well. Following this film, I took a break from serials hoping for offers to pour in. But nothing concrete came my way.

After a two-year break, I returned to television with a negative role in Mangalya. Simultaneously I started working in Malebillu. Then I got an offer to act as a villain in the blockbuster film Milana. I thought this would be my lucky break, but only appreciation came my way.

7 o' clock and Kshana Kshana were personally fulfilling experiences, but they didn't help me gain offers either. Then I was offered Love Guru following which I took a one and a half year break from TV again.  After this, I got back to doing television with Rathasapthami, but only after they assured me that they would have a flexible script and dates pattern so as to accommodate my film offers. I have just finished shooting for my film Gaana Bajana. Television industry has been very supportive of me. 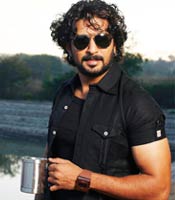 What is your role in Gaana Bajanaa?

The Love Guru team -- director Prashanth, actors Radhika, Tarun, music director Joshau Sridhar -- is getting back together with this film. I play the brother of a goon in the film and sport a toned body, beard and long hair. I have the mass hero look and have worked for four months for it. I am this 'bad boy' kind of character for whom the heroine has a fascination for. I may do another film titled Dandam Dashagunam.

Why do you think you are not getting too many offers despite being a good actor?

Some feel I am overexposed on TV and it's difficult to project me as a film hero. My bad PR skills could be another reason. I just finish my work and leave the sets. I'm not the one to hang around and gossip!

Now I'm considering acting in other languages. In fact after seeing my performance in Police Quarters, some people told me that I am likely to have a good opening in the Tamil industry. But I still have not given up hope and am looking forward to good Kannada scripts. Having said all that, I maintain that even though I have got limited offers, they have all been quality ones. What however hurts is that people ask you to dub for other actors. It is quite difficult to do that when you yourself are an actor.

Has the television experience helped you understand films better?

I learnt a lot about lighting and editing from the television industry. It is only when you understand these procedures will you be possible to contribute as an actor. It is also here that I learnt to face the camera. Also my TV co-stars and team members are my best critics. They say at times that I overact and I'm trying to rectify it. My theatre background on the other hand made me disciplined and also helped me improve my body language and voice modulation.

You have acted with Anath Nag in Preeti Illada Mele and also been a part of T N Seetharam's productions, how have the experiences been?

Ananth Nag is easily among the top ten actors we have. He is a pleasure to watch and act with. He underplays his emotions. You tend to just stand and watch when he is delivering his dialogues. Many a time, I have forgotten my lines and just stood watching him. He has the most expressive eyes. He is an intense actor.

About Seetharam, television is a dialogue medium and his dialogues are strong and accurate. He also addresses current issues through his serials which is a good thing.

What is your take on the kind of serials being made these days?

We can't expect much when it comes to the story line as tracks change depending on viewers' responses. About the often commented length of serials, well, people prefer this pace because even if they miss one or two episodes they can catch up. But all said and done serials now-a-days are more about business than creativity.

And what about reality shows?

I have anchored two. I did a few episodes of the adventure show D for Danger and dance show Kuniyona Baara. But there is too much drama, fighting and crying on reality shows. Even judges stage a walk out. Such things don't go down well with me.

Any plans of directing a film or a serial? What about getting back to theatre?

I have assisted Jayanth as a director in the serial Sahagamana. I surely plan to direct a film. Serials are however a good base to experiment one's directorial skills. Whenever I direct a film, it'll be one on human relationships. I'm not for projecting heroism. I'm more for realistic cinema.

As for theatre, yes I have been contemplating it for a while. But I'm considering attending a workshop before acting on stage again. My prime focus is however to act in films directed by good directors.