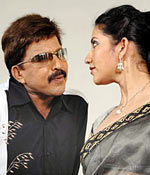 Aptharakshaka, late Vishnuvardhan's 200th film, had created much hype and curiosity. The good news is that it is justified.

The Kannada sequel to Apthamitra fins Dr Vijay (Vishnuvardhan) on a mission to solve the mystery of Nagavalli again. While in the Apthamitra, Vijay is instrumental in ridding his friend's wife of the Nagavalli syndrome, here his assistance is sought to save a family in Mysore.

It's been five years since Nagavalli made her presence felt and as the film's title itself suggests, there can be no better protector than Vijay to stop her. When acharya Ramachandra Shastri (Avinash) realises that the crux of the family's problem lies in the beautiful painting of court dancer Nagavalli, he turns to psychiatrist Vijay for help.

The painting won by Saraswathi (Laksmi Gopalswamy), one of the three daughters of the family, affects just not her life but those of her sisters as well.

Nagavalli has returned we know, but it's the how and why that keeps us on the edge of our seats. Like in Apthamithra, here too there are more than one suspects and we are kept guessing till the end.

The first half is racy. Even though the style of introduction of all the main characters remind you of Apthamitra, this one is done in a more comical way. Vishnuvardhan's introductory song and the comic give and take between him and Komal stand out in the first half.

The second half is a treat to all Vishnuvardhan fans as they get to see him play more than just one role. He essays the part of Vijay Rajendra Bahadur, a cruel king, apart from another character, which going by the spirit of the film, we leave you to discover. The make-up artiste has done a good job with his look.

New face Vimala Raman makes an entry in the second half. She, supported by actor Vineeth, puts on a good show. Sandhya, who plays Lakshmi's sister contributes significantly to the mysterious plot. Though Bhavana does minimal talking, she conveys well through expressions. Vinaya Prasad, Ramesh Bhat and Sreenivasamurthy make for a good supporting cast.

The back and forth narrative technique used is worthy of mention too. Also shots coupled with Gurukiran's background score succeed in creating the desired affect. Though a few bits are inspired, the background music is apt and catchy. The songs are well placed but not as foot-tapping like those of Apthamitra.

Chamundi Thaayi..., Vishnuvardhan's intro song includes digital imagery and comes with a message. Chart topper Ra Ra.... has been included in the film too. Dances by Vimala and Lakshmi are graceful.

The film also has punch dialogues. You'll also find Vishnuvardhan directly addressing his fans. The science versus superstition debate tackled in the conversations between Avinash and Vishnuvardhan. Location and costumes add to the plot. The use of graphics is seen throughout the film.

In short, Aptharakshaka reminds you of the great talent that the Kannada industry has lost in Vishnuvardhan. This one is a must watch.

Directing Vishnuvardhan for the last time