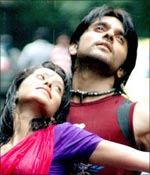 Mainstream Hindi cinema's been in adolescence for quite a while now, trying desperately to disguise a thin line on its upper lip as an actual moustache, and palming fake driving licenses to get us to buy it drinks.

Sure, there's been much talk of pushing the envelope, of brave new filmmakers making radical cinema, but this has always skewed towards the pretentious, the derivative and the hyperstylised.

For a true watershed moment, India's been clamouring for a Hindi language masterpiece that has the potential to connect with both the man on the street and the curator of a film festival, a film with heart and guts and overwhelming originality.

And so in an industry where our output is mostly infantile, Dibakar Banerjee has taken that much-nudged envelope, ripped it apart, and mailed out a magnificently tawdry postcard. He's made a film which lets Hindi cinema sit back, take a deep glug of adulthood, and wipe Haywards 5000 foam from its 'stache as it leers at the girl in stockings. Bollywood has just grown up the only way it could, with Love, Sex and Dhokha.

Dibakar's always been a director with a strong voice, his films reeking of authenticity and, so far, smelling strongly of Delhi. Khosla Ka Ghosla is a marvellous middle-class comedy, and the detailing in Oye Lucky Lucky Oye, a wondrous character study, is the stuff of legend.

Before it went all groovy with Abhay Deol, Oye Lucky featured a young Sikh falling in love with a girl who worked in a greeting card store, and this fledgling romance had such heart that we longed for them to stay the stars of the enterprise.

This time, making a small film when any A-lister in the country is willing to sign his projects, Dibakar's done just that, his film stripped down to the bare minimum with all the willingness of a really good bardancer.

It's a notoriously tricky prospect, making a film with raw, unseen actors, going entirely handheld, entirely digital, and there's always the danger of heading into a gimmicky space: where content is dictated by form.

LSD, which features three very differently themed storylines seen through varied handheld, security and spy cameras, is so finely written that it avoids the obvious pitfalls expertly, and makes the treatment -- that deliciously voyeuristic treatment -- a completely organic part of the storytelling process.

To talk about the stories at length would be doing this audacious film and you, its hungry viewers, a great disservice, but suffice it so say that each story contains all three elements of the film's title, making for genuine surprises.

The interlinking between the three is done with PulpFictionny finesse, with the tales inextricably, naturally, beautifully each a part of the other two. There's darkness, light and much unsuppressed sexuality, and lots of humour to aid the most unsavoury  and the most essential  bits of the narrative.

The characters are priceless. There's a shopgirl who works in a department store and talks of a lover in Russia, a popstar who keeps candybars in his portable fridge right below the whiskey, a graveyard-shift employee who regularly chats up the girl in the store, and a romantic 'hero' who performs with such hardcore movie-within-movie conviction that you can't help but like him.

And then, top of the heap, is a wannabe filmmaker totally, irrevocably, fatally smitten with one of our biggest directors, ironically the man who refuses to outgrow his first great triumph.

India has a million sides, and Dibakar cuts through to some of the seamiest of them, his characters the kind we don't get to see in our candycoated cinema and yet the kind easiest to identify with because of their raw, throbbing character impulses. 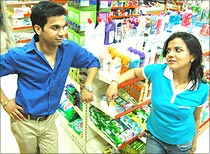 We might not know these characters but it's hard to not believe in them, uniformly solid performances and fantastic dialogue ensuring an unprecedented degree of authenticity.

Anshuman Jha is the pick of the bunch, but all this entire, awesome cast should be very proud indeed. Except perhaps for the girl who works the day shift and yammers on about having a man in Russia, the one character so overwritten she comes across as the lone caricature in a film starring real people.

Because they're so earthy, they sometimes jar, these characters. And therein lies both mastery and extreme filmmaking confidence. You start off wondering if a suicidal dancing girl is too obvious a sketch to be true, to be talking of sexual favours so flippantly, but as you get to know her, as Dibakar and co-writer Kanu Behl go deep under her pimply skin, you figure that she really is the genuine article. There are some moments of overwritten dialogue, but they're too rare to count as a flaw.

The treatment, as said, is quite stunning. Cinematographer Nikos Andritsakis has wonderfully managed to make the cameras seem held by the characters themselves, and Namrata Rao edits with ruthless tightness, making for some killer cuts.

Title cards a la pulp desi literature serve as cheeky, tragicomic titles for each of the three tales, and the film's music is married to the narrative with a casual grace, right from the DDLJ theme to the film's own deceptively simple theme tune, one that goes with anything. Fitting for a film where anything goes.

All you need is love. Yeah, but the S and D from the title often screw it up. This is not a film that sermonises but it clearly has a moral backbone, and sits pretty upright.

It is, as the oft-abused phrase goes, an 'important' film, and one you should watch if only to acquaint yourself with the way things inevitably work.

It's bleak, bittersweet, funny and markedly unglamorous, and yet you come out humming the theme tune, your head blown clear off your shoulders.

Hell yeah. Welcome to adulthood, Bollywood, can we get you another beer?