Kutty Pisasu is strictly for kids 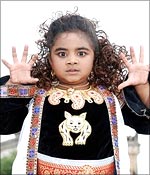 Director Rama Narayanan has been known to make movies that appeal largely to kids -- children play lead roles, accompanied by a boatload of animals that are seemingly more intelligent than the average human.

His latest Tamil film, Kutty Pisasu (Little Devil), is no different except that this time, all the animals have been thrown out and a vintage yellow car has been added to the mix.

Special effects and CGI have always held special attraction for this film-maker and his audience, and this one's no exception.

As for the story, yes, something of the sort exists for the sake of giving the car and kids some screen-time. You've got Kenathadi Kali (Ramya Krishnan, complete in her Amman avatar), who dwells in a well, and guards the village. Three hundred years ago, she humbled an arrogant foreigner (Nasser) and promised to guard his henchman, her faithful devotee (Ganja Karuppu) and his descendents for all time.

In the present time, her divine grace is needed once again. She does give it, but not before an errant ghost has had time to wreak its revenge upon the villains. To give the ghost its due, it's not evil incarnate. Instead, it used to be Savithri (Kaveri. What happened to this once peppy girl?), who was a happy neighbour, in company of her brother (Ganja Karuppu again) to Gayathri (Sangeetha) and her father (Delhi Ganesh).

Gayathri's happily married now, and the couple has an over-enthusiastic daughter Priya (Keethika), who dances, speaks and generally hams like an adult, minus all the real sweetness of a child. Soon, a yellow car enters her dreams, and she's possessed. Cue for a band of entertaining villains to make an entrance, headed by Nanjappan (Riyaz Khan, who mouths dialogues about magic and ghosts like it's an everyday occurrence with him.).

Michael Bay would have several heart-attacks if he knew the effects his Transformers was wreaking upon canny Tamil directors and even more, how they were being used. Rama Narayanan's car turns obligingly into a yellow demon and then performs a rather capable kuthu dance with the pint-sized heroine.

In addition, it also plays host to the ghost of Ganja Karuppu. Together, the brother-sister duo plays head-games with their enemies (and with you), while Sangeetha, Ramji and Delhi Ganesh run around like headless chickens.

Story-wise, there's no great variation from predecessors like all the Amma movies but this one comes with an interesting ghost-twist. On the flip side, the production values are tacky, the acting juvenile and the screenplay downright silly. Sangeetha and Ramji over-act to glory, while Delhi Ganesh is genuinely funny, after a long time.

People can still enjoy the film, if they have the mental capacities of a six-year-old. Which is why it works for children (not those weaned on Harry Potter, though), who genuinely enjoy the show. Strictly for kids.

Review: Balam's screenplay lets it down

Malai Malai is a potboiler