Paleri Manikyam is near perfect 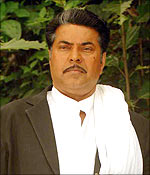 The film is near perfect with minor ignorable blemishes. It is based on T P Rajeevan's novel of the same name. It tells the story of a private detective, who returns to his birthplace to solve a murder mystery that occurred on the same night he was born.

Dectective Haridas (Mammootty) takes up a case just to satisfy his curiosity, not to find or punish the culprit, as all the suspects in the case are dead. His purpose, which seems vague in the beginning, achieves clarity only halfway through the story.

He brings along a criminologist Sarayu (Gowri Munjal) to assist him, and they have an extra-marital affair. So even his motive is suspect in the beginning; it seems as if he is only interested in having a good time with his mistress in the verdant locales of Paleri. But he peals the mystery layer by layer, fighting roadblocks at every turn.

A plethora of characters make their entries and exits without giving the viewer any inkling as to where the story is headed. But every loose end is perfectly tied up in the end.

Even if the story does not incite you, the bewitching visuals will -- the faded look of the flashbacks and bright greenery of the present. Cinematographer Manoj Pillai proves that he is one of best young talents of the country.

Mammootty's performance in multiple getups may seem to be ego massaging for the star. But by the climax, we understand that it's an absolute necessity.

Among the other cast, Sreenivasan -- in a small role -- leaves a strong impact on the minds of the viewers. Siddique is his usual self, who does not have anything to experiment with.

Shweta Menon is oomphy while newcomer Mythili does not have enough screen time but she leaves an impression.

On the whole, Ranjith's take on the first recorded case of sexual harassment in the state is rich visually as well as in content.