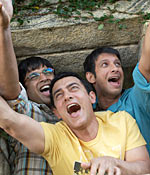 A fresh tussle on sharing revenues from a movie is brewing. The fight is between Vidhu Vinod Chopra, the producer of 3 Idiots, and multiplexes. The Aamir Khan-starrer is slated for release on December 25.

According to sources, Chopra has sent a mail to leading multiplexes PVR Cinemas, INOX Leisure, Cinemax India, FAME India, Fun Cinemas and BIG Cinemas, stating that the producers of the film deserve a higher revenue share.

Chopra is asking for 52 per cent revenue share in the first week, 47.5 per cent in the second week, and 40 per cent in third and fourth weeks.

3 Idiots is a Rs 35-crore film starring Aamir Khan, Kareena Kapoor, Sharman Joshi and R Madhavan. The film's distributing rights were bought for around Rs 80 crore by BIG Pictures. Though BIG Pictures has the distribution rights, Chopra, as a profit-sharing partner, is trying to negotiate the revenue terms with multiplexes.

Multiplexes were hoping to sign on the movie this week to open advance booking.