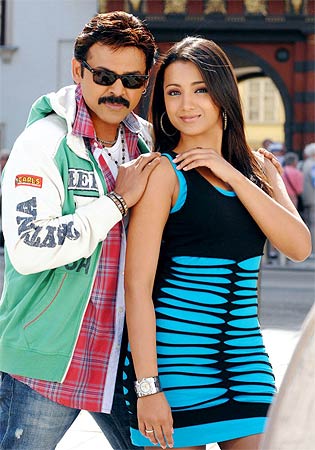 Om Namo Venkatesa is not the holy chant one hears at the Tirupati temple but the name of Venkatesh's new Telugu film, directed by Srinu Vytla.

Venky plays Parvateneni Venkata Ramana in this rollicking fare, which is produced jointly by Suresh Productions and 14 Reels Entertainment.

Heroine Trisha is supposed to have a substantial role in the film. The other artistes include Chandramohan, Brahmanandam, M S Narayana, Ali, Dharamavarapu, Subbaraju and Mukesh Rishi.

Om Namo Venkatesa is slated for a Sankranti release.

Chiranjeevi is good, but Andharivadu disappoints