News
Business
Movies
Sports
Cricket
Get Ahead
Money Tips
Shopping
Sign in  |  Create a Rediffmail account
Rediff.com  » Movies » 'No game show is bigger than my family'

'No game show is bigger than my family' 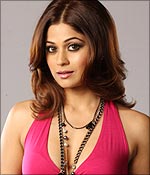 With sister Shilpa Shetty's wedding coming up on November 22, Shamita chose to exit Bigg Boss without being up for eviction.

Shamita did not want to miss the wedding, like she missed the engagement a couple of days ago.

She tells Rajul Hegde about her stint in Bigg Boss.

What was the first thing you did after you came out of the house?

The minute I got out, I grabbed the nearest person's phone and called my sister. We are extremely close and I'm so glad I will be able to attend her wedding. I know how difficult it must have been for her to get engaged without me. But since I got to know about her wedding date, I wanted to be with her no matter what. Family comes first for me. I'm happy to be out.

Why has Shilpa brought forward her wedding from January 17 to November 22?

Shilpa had decided to get married on January 17 due to Sunny Deol's shooting schedule in November.

Shilpa and my mom believe in astrology. They must have rescheduled the wedding because of the planetary positions in her astrological charts. Her shooting must have also gotten cancelled. I spoke to her for only five minutes after coming out, so I can't tell you the reason.

How did you react when you learnt about Shilpa's engagement?

(Housemate) Pravesh Rana told me about Shilpa's engagement and the November wedding. He was not sure about the date. I was really confused, upset and restless as I got to know such important news from a stranger. Bigg Boss did not even bother to inform me.

I wanted to ask Bigg Boss whether she was really getting married this month. After three days, they accepted my request and called me to the confession room. A box of ladoos and an envelope were kept on the table. On the cover, it was written that we want to see a child in you more often and keep smiling. I started crying immediately after reading it.

I came out of the confession room and informed everyone of the options given to me. Before I could complete my sentence, they told me that I had to stay another week with them. I was happy to know that they loved me, so I spent another week there. 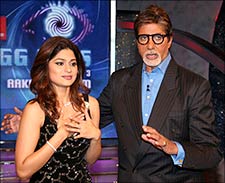 Were you upset after you heard about Shilpa's engagement?

Yes, I was. But Shilpa had written the letter very sweetly. It was an emotional letter that brought tears to my eyes. I was sad that I missed such an important day but I did not think negatively.

Will your outfit for the wedding be ready on time?

I had spoken to (fashion designer) Tarun Tahiliani before I entered the house, as the wedding was supposed to happen in January. So the basic meeting has already happened. I was worried about who will stitch my clothes within 10 days and how I would manage it. But Shilpa told me that she had organised everything. So I don't have to plan from scratch.

Any lessons learnt at Bigg Boss?

I have done a lot of work like cleaning and cooking. I want to make a dish for Shilpa called Kada prasad (a Sikh prasad made of wheat), which Poonamji (Dhillon) taught me. It is fattening but I will make it for her.

How was your experience in the house?

I learnt some shocking truths when I came out of the house. I did not go there with any plan; it was a show for me. I knew that whatever I would do in the show, it would remain with me till the end of my life. So I did not want to hurt anyone. There was no enemy in the house, though certain people played games. I recognised Rohit's (Verma) attitude. I hope his friends will make him understand. I am fortunate I came out of the house at the right time. It's becoming dirtier now.

Did you make any friends on the show?

Aditi Gowitrikar, Bhakthiyar and Tanaaz Irani are friends for life. I want one of them to win the show. I feel sorry for locking Aditi in jail during one of the tasks.

Will you return to the show?

Honestly, I have just come out and this is just sinking in. I want to go home and prepare for the wedding. I have not thought of the wild card yet.

Tanaaz: We fight like that in front of our kids

Ismail: I was the strongest contender in Bigg Boss