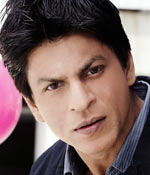 Shiv Sena activists on Tuesday held demonstrations outside theatres in eastern suburbs of Mumbai against Shah Rukh Khan's upcoming film My Name is Khan, prompting the police to arrest 46 troublemakers.

At Mulund area, the glasses of Mehul cinema were broken after one of the protesters pelted stones, police said adding that several gathered outside Huma Cinema at Kanjurmarg and R-City Mall at Ghatkopar area, shouting slogans against Khan
and the movie, scheduled to be released on February 12.

The protesters threatened the theatre owners to stop the advance bookings or face the severe consequences. The Sena
activists were booked for unlawful assembly, rioting and further probe was on, police said.

The Sena had threatened to stall the screening of the film, protesting Khan's support for inclusion of Pakistani players in the upcoming IPL but party supremo Bal Thackeray later said that the film's release will not be disrupted.

Earlier in the day, Karan Johar, director and co-producer of film, met City Police Commissioner D Sivanandhan to discuss the security issues ahead of the movie's release.

Do you want to watch My Name is Khan? Write in!

I am what I am because of Mumbai: SRK