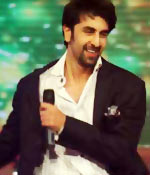 The difference was pretty stark and obvious. Last week the most successful composer of today, Pritam played mentor to the contestants of Indian Idol 5. In return, all the contestants sang his numbers.

This week too, the contestants had a music director as a guest. Pyarelal of the famed Laxmikant Pyarelal duo came on the show to guide the contestants. Since the theme of the show was the 'Seventies Decade', they sang songs set to tune by LP.

The synthesized sounds one heard last week had vanished. In their place was a 150-piece orchestra where counters were being played by a 30-piece string section. The entire music section was manual, but everything seemed so much in order. And, it was music to everyone's ears.

Without belittling Pritam's achievements as a music director, one must say that Pyareji stole the show. Not just by directing the orchestra for the first half of the show, but by the sheer innocence of all the numbers they composed.

Sadly enough though, innocence took a backseat during the elimination this week -- Meghana Kumar, the visually challenged singer -- bowed out of the contest this week. Not because she was a bad singer but because she could not be the entertainment package people expected from an Indian Idol finalist. She herself said this in her media interactions, and there is no way one can think or believe otherwise.

Naushad Ali, one of the strongest contenders of this season of Indian Idol, was the first one to sing. He belted out the Mohd Rafi number from Farz -- Mast baharon kaa main aashiq. Expectedly he did justice to the song with his soulful, yet playful voice. Salim was all excited to hear his rendition.

But, without any doubt, the best Mohd Rafi song was sung by Rakesh Mani. His rendition of Naa jaa kahin ab naa jaa was superb. The way he handled the high and low notes with equal ease was unbelievable. The singer who always has a smile on his face was awarded the best singer of the day. Even Pyareji was seen enjoying the song a lot. One feels if Rakesh can maintain the consistency, he will definitely give Naushad a run for his money!

If Rakesh was the find of the day, the disappointment of the week was undoubtedly Shashi Suman. He sang Mere dil mein aaj kya hai from the film Daag. Shashi could not do justice to the popular Kishore Kumar number. He was off-key and the feel was just missing. The judges were unhappy and so was the audience. Coming from a soulful singer like him and considering the performance he gave last week, this was completely unexpected.

Sreeram, however, did justice to the romantic Kaate nahin kat te from Mr India. The sensuous song which conjures up the image of Sridevi in a wet sari was belted out near-perfectly by the southern sensation. And he was ably accompanied by the orchestra. The result was pure perfection.

The Kishore Kumar saga continued with Yashraj belting out Mere umar ke naujawano from Karz. His energy and enthusiasm for singing this number was evident in the rendition. Not only did he sing in tune, but also managed to add the much needed punch and zest in the song.

The result? The entire audience, including Ranbir Kapoor whose father Rishi Kapoor danced to the original number, started shouting 'Once More'. Ranbir, however, was more excited after Shivam sang Ek Haseena thee again from Karz. The handsome star came up on stage to personally congratulate Shivam for his perfect rendition.

Ranbir was the star attraction of the show. More so since he appeared in a new bearded look which made the girls go crazy over him!

Speaking of girls, they did a pretty decent job of singing in the show.

Arpita Khan was good as expected. She sang Bindiya chamkegi and did a pretty good job with it. 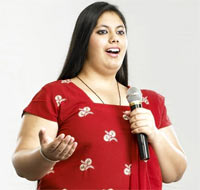 Bhoomi Trivedi, the attractive rapper from Gujarat sang another number from Daag -- Ni Main Yaar Manana Ni -- and did complete justice to the song.

So did Tia. Her rendition of Paalki mein hoke sawar chali re was sweet and close to perfect. Though she went off-key few times, the overall impact and her stage presence more than made up for it. Anu was spot on. Manisha however once again goofed up on stage when she forgot her lines, but her singing was more or less on track.

But the disappointment of the day was Swaroop Khan. He sang the famous Pankaj Udhas number Chitthi aaye hai from Naam. He tried to add a Rajasthani folk touch to the number but made a mess of it. The song is famous for Pankaj Udhas' soulful rendition and the LP tune makes it mandatory to sing it just the way it is. There is this cardinal rule regarding legendary composers like S D and R D Burman, Salil Chowdhury, Shankar Jaikishan or Laxmikant Pyarelal -- you have to sing their songs exactly the way it was composed which Swaroop didn't and he paid a price for it.

Overall a nice week of nostalgia after the dhoom-full week with Pritam!

Anu Malik: Indian Idol is not about the judges