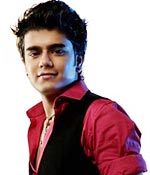 After a couple of weeks of predictable eliminations, unpredictability raised its head on Monday when Yashraj Kapil was shown the door.

While there were ample reasons, the most prominent one being his over confident nature, his elimination still came as a shock to many.

Apart from the elimination, another surprise of the day was the spat between an aggressive Yashraj and the mild-mannered Naushad Ali Kawa. Both of them threw technical challenges at each other.

The third unpleasant and unpredictable event that surprised everyone was Arpita Khan coming in the bottom three once again despite performing so well. Guess she has gotten used to this by now!

The theme of this week's episode was Idol Ki Sholay with judges Anu Malik dressed as Gabbar Singh, Sunidhi Chauhan as one of the girls in Gabbar's team of dacoits and anchor duo Abhijeet Sawant and Hussain Kuwajerwala as Amitabh Bachchan and Dharmendra, respectively. Judge Salim Merchant was missing since he was performing at the FIFA World Cup in South Africa.

One must hand it to the Indian Idol team for their excellent packaging of entertainment and music in the show. Bhoomi Trivedi was the first to sing this time. She chose Taare hai baraati from the film Viraasat. Not only was the song right up her alley, she rendered it beautifully. The judges, expectedly, were impressed. Anu went to the extent of saying that he felt a live recording was going on. Considering her looks, voice and also screen presence, Bhoomi is definitely one of the strongest contenders this year.

However, the judges were not impressed with Shashi Suman, who came next. While he had been steadily improving in the last few episodes, this time he was far from perfect. Dastaan e Om Shanti Om originally sung by Shaan was what Shashi sang and one must say that he went off key quite a few times. However, both Anu and Sunidhi praised Shashi's ability to come back on track immediately after making a mistake.

Om Shanti Om seemed to be the favourite film this time with Naushad Ali also selecting a song (Chan Se Jo Toote) from the film. While he did do a good job with the song, it did not do justice to his versatility. In fact, Sunidhi specifically went on to say that Naushad has become very monotonous in terms of song selection. It would not be entirely wrong to say that Naushad's graph is on the decline ever since the last few episodes. He is one of the best participants this time and no one would want to lose him. So if Naushad has to make amends, it is now!

Apart from Tia Kar (Krazy kiya re) and Shivam Pathak (Tera jaadu chal gaya), everyone sang vintage numbers. It was quite a treat listening to these young contestants belting out old numbers. Take Arpita Khan for example. The energy and elan with which she belted out Hoton mein aisi baat was infectious and got the judges fighting. While Sunidhi felt Arpita did a splendid job, Anu did not. They went on arguing till finally it was decided that they should agree to disagree.

Mr Consistent -- Sreeram -- was next in line and he sang the melodious Suresh Wadekar number from Chandni -- Lagi aaj saawan ki. It was the perfect song for his voice, and that is what Anu pointed out as well. Sreeram knows what suits him and plays to the gallery accordingly. After hearing this song, one does wonder why Shiv Hari does not compose any more.

Rakesh Maini's Yeh Dosti from Sholay and Swaroop Khan Ke pag ghungroo from Namak Halal got lukewarm responses from the judges while Rakesh got the thumbs up from both the judges. But the soul of the song was missing in Swaroop's rendition.

Next week, musician trio Shankar Ehsaan Loy will come to Indian Idol along with Asha Bhosle. Looking forward to the next episode!

'I am somebody because of Indian Idol'

Anu Malik: Indian Idol is not about the judges