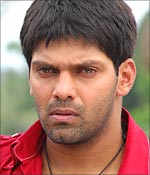 Director Gunasekhar uses a traditional theme of an arranged marriage in this contemporary age where love marriages seem to be the order of the day in the Telugu film Varudu.

Gunasekhar packs it with enough of action, drama and a five-day wedding ceremony (though it does not occupy that much screen time).

Essentially it's another story of good versus evil in the commercial mould. The treatment particularly in the first half, about harking back to tradition, is okay. Varudu also marks the Telugu debut of Tamil actor Arya.

Sandeep (Allu Arjun) is the son of rich parents Gopi (Ashish Vidyarthi) and Vasundhara (Suhasini Mani Rathnam). He is like today's youth -- loves parties, pubs and girlfriends. Yet he surprises his parents when tells them about his plans for an arranged marriage. He asks them to look for a girl. He further astonishes them when he refuses to see a photograph of the girl whom they have selected. He says that he wants to experience the magical moment of seeing the girl the first time. What's more, he wants to have a traditional five-day wedding attended by all relatives!

When the wedding ceremonies are on and the bride and groom see each other it's a magical moment. This is the moment when the bride Deepti (Bhanu Mehra), the heroine of the film, is actually revealed. Till then she is kept a secret.

The wedding is almost symbolised except for the tying of the mangalsutra when the mandapa collapses. There is enough commotion with people running helter-skelter in search of their beloved ones. In this melee Sandeep notices his bride is abducted. He chases the kidnappers but they outsmart him and take her away. This is the moment Diwakar (Arya) appears and tells Sandeep to forget her. Sandeep postpones his plan of going to the United States where he has got a job and in fact wanted to get married at the behest of his parents' wishes and take his bride.

A week passes and there's no news of Deepti despite the help of the police. The marriage hawan is kept burning and the chants continue. The others in the marriage party advise Sandeep to marry someone else, as he has not tied the mangalsutra on Deepthi's neck. Sandeep vehemently disagrees. What happens next is forms the rest of the story. 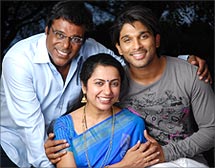 Gunasekhar works on a very simple line without adding much substance to it. In today's time and age it's quite nice to see the concept of an arranged marriage being taken up but it's dealt in the formulaic way of hero versus villain finally.

It's the first half which is nice to watch, particularly Arjun. The second half of the film boils down to the usual hero-villain rivalry and is routine to a large extent.

It's here that Arya makes his presence felt. The songs however are a bit of a distraction. The theme of boy and girl on the run (from the villain) seems to be a favourite with Gunasekhar and it's visible in Varudu (albeit to a small extent) too.

Allu Arjun has put in a competent performance, subdued (actually the character he portrayed was more subdued in the movie) when necessary and volatile when needed. He's a good dancer and does justice to his role.

The heroine looks pretty as a bride (resplendent in her finery) and is just about okay. There's not much enigma about Bhanu as hyped. She seems to be another north Indian girl joining the brigade in Telugu cinema.

Arya makes a mark in Varudu. As the stage actor (essaying different roles) he is powerful, menacing, quiet yet indomitably spirited. Varudu is a good debut for him. For a change Ashish Vidyarthi has a good role, while Suhasini doesn't have much to do (except in the first half). One wished both these actors had more scope to perform.

On the technical front Rajasekharan's camera work, art direction by Ashok and music by Mani Sharma are good.

Gunasekhar has taken quite a bit of time after the 'disastrous' Sainikudu to come up with the mainstream Varudu wherein he has concentrated on the visual presentation and graphics more than on the content. Worth a watch.