News
Business
Movies
Sports
Cricket
Get Ahead
Money Tips
Shopping
Sign in  |  Create a Rediffmail account
Rediff.com  » Movies » When did Badmaashi get this boring? 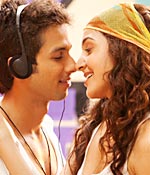 Perhaps, like in the one fantastic film he was great in, there really are two Shahid Kapoors. One is a decent actor, the sort of person Imtiaz Ali can coerce into impressive restraint, and Vishal Bhardwaj can work miracles with.

The other, more frequently seen brother is a talentless hack, one of those young dancing boys who purses his lips to show emotion and wallows in his own smugness.

This film, as you might have guessed, stars the latter. Not that director Parmeet Sethi -- who will forever be known as the man Simran turned down in the biggest hit of our times -- is absolved of blame purely because there isn't a single actor in his film. (Well, there's Pawan Malhotra, sure, but there's only so much that ever-reliable performer can do on his own. Remember Delhi 6?)

Badmaash Company is an unimaginably boring film that is so amateurish it hurts. Peopled entirely by imbeciles, the film is about a bunch of swagger-happy bling-loving scamsters who come up with some mild manipulation with selling sneakers.

So smitten is the director with this plan that he shows the team in action again and again, setting up sequence after sequence first so Shahid can slowly explain his plan and then repeating the shots so they can execute that very spelled-out plan.

Meanwhile, we yawn and wait. Surely there must be more to an entire movie than a group of fools parading around in costumes and selling shoes. There is: they move on to doing the exact same thing with gloves. And we're shown it all again, oh yes. Mr Sethi, looking up the word 'montage' might be a good idea.

And it's all soaked to the gills in cliche. There's melodrama of every kind, as moron by moron develops trouble -- daddy issues, relationship insecurity, alcoholism, overriding ambition, a suddenly stubborn gambling streak -- and all of it is as obvious as it gets.

The two vivacious ladies on either side of me in the theatre today made a game out of predicting what hackneyed melodramatic lines and twists would come next: they were mostly right, and the few times they erred, their predictions were far superior to the directors.

And before you think it's a so-bad-it's-good kinda film, it's not. It's just drab and repetitive and quite persistently annoying, and thanks to every theme being stretched out over and over again, feels absolutely unending.

Shahid, as said, scowls and furrows his brow to look intense, makes puppy dog eyes while talking extra-plaintively to his folks, and raises eyebrows self-appreciatingly when he thinks he looks pretty. 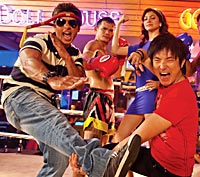 Meiyang Chang of Indian Idol seems to have gotten this gig simply because of his Chinese roots, leading to some weak gags.

Vir Das plays a miraculously inconsistent character, one who starts off frivolous and armed with that Bollywood flavour of the season, a stutter, but loses that and his amorality as he turns into the calm one.

And all of these boys, these boys acting as if in a poor school play, are outdone completely by the girl, who is in a whole different league of awful.

Anushka Sharma, clad in technicolor pants and trying hard to look at ease while showing skin, is painful right from her first shot, where she overacts while chewing bubblegum. And giving her a casually sexy personality -- complete with the most wannabe vocabulary of all time, freakin' screwy stuff, yeah -- doesn't help matters.

It's hard to take this sort of film seriously, a film that lathers on the same lackluster ideas over and over again, expecting us to lap it up but actually beating us into stupor. There's not a single scene in the film that actually works, and there are a couple that just hurt: including a very poorly thought out reference to a music legend.

Nope, all they get right with Badmaash Company are the first three letters of the title.

'Shahid was my first choice for Badmaash Company'