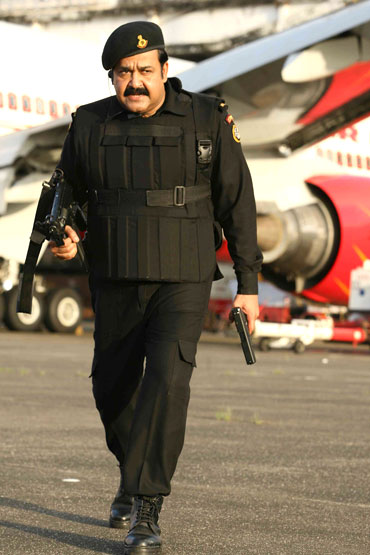 Mohanlal's character of Major Mahadevan has by now become a popular name after successful Malayalam films like Kirti Chakra and Kurukshetra. The director of both the films, Major Ravi, is narrating another adventure of the character in Kandahar, a story based on a plane hijacking.

The film attracted national attention thanks to the presence of Amitabh Bachchan in a brief, but significant role.

Major Ravi, who has also written the script for the film earlier explained that the hijacking is not an account of the controversial 'Kandahar hijack' that happened in 1999. The shooting of the film has been completed at various locations across the country and abroad.

Amitabh Bachchan is Loknath Sharma in the film, a retired teacher, who is married to a Malayali. Former heroine of south Indian films Sumalatha plays his wife and Tamil actor Ganesh Venkitaraman plays their son, a commando in the film.

Major Ravi's earlier films had instances from his own life as a soldier. Besides Kirti Chakra and Kurukshetra, he has also directed Mission 90 Days with Mammootty as the hero, based on the commando operation against those accused in Rajiv Gandhi's assassination.

With Mohanlal back as Major Mahadevan, there should be enough to look forward to in the film.

Kandahar will hit the theatres on December 9.