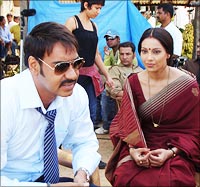 There are some directors who can handle diversity. Then there are those who would rather stick to the same tried and tested formula which gave them their first hit.

It can be safely said that Priyadarshan belongs to the former. After furnishing the multiplexes and single screens alike with a string of no brainer comedies such as Hera Pheri and Hungama, Priyadashan is finally peddling some serious, provocative cinema with Aakrosh. And it works.

Akshaye Khanna and Ajay Devgn play the parts of Siddhant Chaturvedi and Pratap Kumar, two honest CBI officers investigating the absence of three medical students who go missing following a visit to the town of Jhanjhar, Bihar, for Diwali. Two months after the incident is reported there seems to be no effort on the part of the authorities to explain their disappearance.

Once hired to solve the case, Siddhant and Pratap face innumerable hurdles. First from the uncooperative townsfolk, who constantly live under the fear of the orthodox Shool Sena and local politicians; and then the sloppy infrastructure of the local police, ridden with corruption and apathy.

Priyadarshan's approach to filmmaking with elaborate plots and storylines continues with this film as well. What starts out as a simple investigation into the case of three missing medical students evolves into an intricate narrative of honour killings, corruption, political power, and the eternal dynamics of good versus evil.

And since this is a Bollywood film, the obligatory item number, love story -- played out between Ajay Devgn and Bipasha Basu -- and action sequences have been thrown in. However, Aakrosh is a film which could have stood alone minus the standard trappings. It's based on an interesting premise; enough material to keep the audience hooked.

The acting is brilliant, especially (and unsurprisingly) that of Paresh Rawal in the role of corrupt policeman Ajatshatru Singh. It's been a while since we've seen Rawal in a negative role, and he carries it off with ease. Bipasha however fails to impress inspite of the immense emotional and narrative scope her character possesses.

The action sequences, although important, could have been a little less exaggerated to retain the realistic air of the film, which is drastically damaged by Devgn making ridiculous jumps from rooftop to rooftop. And the songs which impede the narrative and only serve to hamper the flow. While a haunting background score succeeds in heightening the mood of the visuals, the songs in themselves are an irritation. When Bipasha has been humbly dressing herself in a sari throughout the first half of the film, suddenly seeing her in a skimpy outfit for the must-have song is a bit absurd. 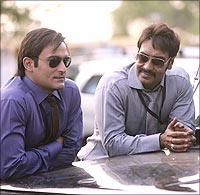 Although convoluted, the story isn't hard to follow. New narrative elements are added to the plot every few minutes, but there is a constant contextual spine linking all of them together, making the twists and turns of the story easy to comprehend. It has the potential to drag, but that is sidelined owing to the quick, engrossing pace of the film.

The screenplay is an appropriate mix of drama, violence, suspense, neutrality and even the odd dose of humour. What is commendable about Aakrosh is the unpredictability of the tale. In a time when audiences are able to guess the outcome of the film after just five minutes of viewing, it is refreshing to come across a plot that keeps you speculating right till the end.

Unlike Priyadarshan's previous ventures, there has been some serious thought with regard to the cinematography. The sights and scenes of rural Bihar have been beautifully captured by S Tirru and are integral towards creating the overall atmosphere of the film. Aakrosh is filled with an experimental assortment of shots and visuals that will have you question whether this is really Priyadarshan, or Ram Gopal Varma trying to outdo what he did with Sarkar.
In the final analysis, Aakrosh is a tight film. It's dark, it's violent, it's informative and it's packed with a load of shock value which keeps you at the edge of your seat from start to finish.

It's is everything a film of its genre should be. Realism, Bollywood-style! Go watch this.