As good as Mrs Murugun's dosas, I say! 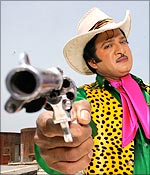 Director Shashanka Ghosh's Quick Gun Murugun takes every convention, cliche and character from popular cinema (and importantly, Tamil cinema) and turns them into delightful caricatures. And because our cinema has been inspired by so many different voices, QGM gets a rich palette to play with -- Spaghetti Westerns, Martial arts revenge flicks, Tarantino, Matrix, Terminator, Clint Eastwood, Helen, Rajnikanth, the moist-eyed 'Ma', the chilling bald-headed villain, talking portraits and college lovebirds played by uncles and aunties and more.

In its outrageous, comic-book treatment, QGM  comes rather close to the comedy-action-crime film Kung Fu Hustle directed by Stephen Chow. In its flavour, it is as potent as desi chilli powder and chutney.

QGM is surprisingly violent. There is enough blood and gore with whizzing bullets and cracking whips to keep you at the edge of your seat. The action sequences (Sham Kaushal) are superbly executed, with the faceoff at the Coconut Tree Climbing Institute and the duel in a traffic jam being our favourite. The tender coconut bombs were a killer idea. Pun intended.

Murugun, the vegetarian Tamil cowboy, is Ghosh's tribute to the archetypal hero, who dominated popular imagination for decades. He was this larger-than-life, over-the-top, generous to a fault, protector of the poor, saviour of the ladies, faster the bullet, sucker for mother's cooking who cries at the drop of a hat (literally) with a bad dressing sense man, we canonised in our cinema.

But lest you go in expecting some bawdy humour and slapstick comedy, be warned. QMG is not your typical slide-splitting, laugh-a-minute fare. And it definitely does not expect you to 'leave your brains behind'. The laughs do happen but more often you are left smiling at the intelligent dialogues and their allusions to cultural idiosyncrasies, the parodies and the sarcasm.

"This is a private road", says QGM, when Mango Dolly tries to seduce him. "He has become thin as a chewed out drumstick," says Murugun's sister-in-law, who makes the 'best dosa-sambhar' in town. Hoping to convince Murugun to take up a decent job, his Locket Lover urges him to "Get a kerosene dealership." And after having taught a handicapped robber a suitable lesson, Murugun tells him, to "apply for a phone booth instead." And even Big B is not spared when Reddy suggests his team rope in Bachchan to endorse the terrible Mc Dosas, and mimics his somber style to the 't'. Ouch! 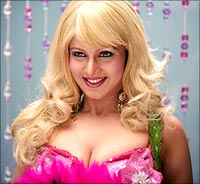 The art direction, styling, the construction of each frame has been handled deftly. Mango Dolly, the don's moll, wears a blonde wig and furry nighties around the villain and brown hair, pink satin petticoats with backless cholis around Murugun.

The villain, Rice Plate Reddy's weapon of mass destruction is Mc Dosa which boasts of a Ronald Mc Donald parody with decidedly Dravidian features. QGM actually cries into a glass of whisky while the villain wears gold underpants and red 'dollar' briefs with a secret 'money' pocket. QMG is lured into a "honeymoon soot" at a rundown hotel calling itself, Well-Known Lodge, which has pink heart shaped cushions and a creaking bed. And heaven's messenger drives a cart attached to a bike which 'moos' like a cow. Well, by the time the film gets over, you will have your own list of favourites.

Some of the goriest scenes in QGM are tempered with dark humour. When Rice Plate Reddy sounds the death knell for his aide Gun Powder, a near-blind octogenarian is summoned with a prehistoric typewriter to drum out his "resignation". Tension mounts, Gun Powder is inching towards his death, Rice Plate dictates the lines, relishing every innocuous word, giving it a sinister twist, to the unmistakable tune of Happy Birthday in the background. How this sequence ends is for you to find out.

Casting is near-perfect, with Dr Rajendra Prasad going about his business with all seriousness. His rosy cheeks, penciled moustaches and scarlet lips are as effective as his green, yellow and orange costume. But not for a moment do you doubt his sincerity as he delivers the funniest and corniest lines with the straightest face.

Nasser as Rice Plate Reddy is a treat to watch with his flashy rings, white and gold outfits and his favorite expression, "Tension, tension, tension da!" Watch out for his ear fuzz set against a shiny bald pate. Here's a potential comic book villain. 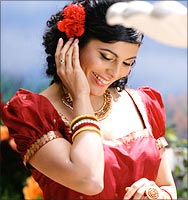 Mango Dolly, played by Rambha, is a buxom beauty (a la the Southern sirens) in a blond wig and blue eye-shadow (a la Helen). Her outfits we thought, went out with the Gemini Circus. But we were obviously wrong, we say!

What stands out in the film is the sound design and the music (Sagar Desai), which combine to make this spoof a full-blooded comic-action-crime thriller. The Carnatic flute version of The Good, The Bad and The Ugly signature tune was a treat.

From his two-minute life span on a music channel, Quick Gun Murugun has come a long way indeed and deserves this full length feature dedicated to our very own Indian Cowboy with a buckle to die for (Stylists, may I please have a replica of the same?!)

On the whole, QMG is as delicious as Mrs Murugun's dosas. As Rice Plate would have said, "A1, Tip Top!"