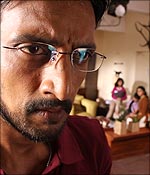 The 'success' of a film pretty much ensures that a sequel will be released as soon as the filmmakers can collect enough elements from the previous film to roll cameras.

I suppose Phoonk by Ram Gopal Varma made enough money to justify the production of a sequel. The first one was about black magic, so I suppose this new one is about more black magic and a little revenge.

This time around RGV has handed the directorial reigns to Milind Gadagkar, the man who wrote the first instalment. And the film picks up not too far away from where the previous one left off.

Madhu (Ashwini Kalsekar, in appropriately grotesque makeup) has returned from the dead to torment Rajiv (Sudeep) and his family. They may have moved to a new home with a pool and access to a beach but it appears that the demonic presence has travelled with them.

Before long voices are heard all over the house, reflections disappear from mirrors and his young son Rohan (Rishabh Jain) is scared stiff by the doll his daughter Raksha (Ahsas Channa) brings home one day. Things come to a head for Rajiv when his wife Arati (Amruta Khanvilkar) is possessed by the spirit of Madhu who promises to do very bad things to his family before she exacts her revenge.

This movie does 'creeping dread' pretty effectively. The first twenty minutes of the movie focus singularly on setting up the family's move to their new home.

The floating camera work by Lenhert Pereira (under Director of Photography Charles Meher), the accompanying creepy background score (Dharam and Sandeep) and the effective sound design (Jayesh Dhakan) contribute to a sense of impending doom on several occasions.

That said however, too many sequences in this film promise a terrifying spectacle and then deliver a predictable 'been there, seen that' outcome, which gets quite frustrating after a point.

The editing is pretty lax and it often feels like several scary moments would have been more effective if they had turned up a beat or two quicker than they do on most occasions. Horror, like comedy, is all about timing and too often the editor gets the timing wrong on this movie. 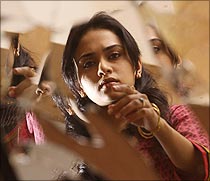 Apart from that, there are also sequences where people don't seem to be arriving from point A to Point B in a logical manner. Like there is no logical explanation for how the kids ended up exploring the beach one moment and then wandering through the jungle behind their home in the very next shot.

I suppose it is too much to ask of movie children to not pick up random dolls that they find abandoned in a jungle. And I suppose it is also pointless to draw attention to the truly atrocious dialogue. Rohan seems to speak only in superlatives and cliches. Everybody overacts. The presence of Rajiv's sister Arushi (Neeru Bajwa) and her husband Ronnie (Amit Sadh) seems to be justifiable only as an injection of sex appeal since the lady prances around in tank tops and short shorts for most of her time on screen.

If one were to break this movie down into its component parts this is how it would play -- people walk around the house, its grounds, or the beach spouting inane dialogue; the camera floats away, the music builds to a crescendo and (occasionally) something 'scary' is revealed. Many of the previous movie's greatest hits are back -- the scary face at the window, the disturbingly behaving reflections in the mirrors, the crow... it is all filmmaking by the numbers. And it all adds up to a big fat zero.

The happenings in this movie are not as scary as the notion that producers are repeatedly funding movies like this. I suppose we get the entertainment we deserve but one can't help feeling that the man (Varma) who helped rejuvenate the horror genre in India might also be instrumental in hastening its demise.