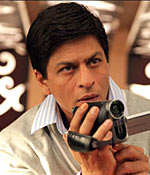 We know his name. Each and every one of us. He's been the country's de facto Superstar -- a position which inevitably brings its share of can't-act brickbats, the kind Brad and Tom still face with every release -- for nearly two decades, and if there's one thing every mouth in the country knows, it's how to say his name. (Most of us have even got the epiglottis-sourced pronunciation right, it's not that hard. As you read this, a new batch of freshly seduced Americans are trying to get the kkhh going, guaranteed.)

What we don't know -- or choose to forget -- about the man proud to call himself King is the fact that he can occasionally surprise us, pull the rug out from under our jaded feet, amuse us as only a performer gifted with glorious inconsistence can. Again, he does.

In this latest film, Shah Rukh is cast in a showy part -- that of autistic superhero capable of anything, living flawlessly and forever in god-mode -- and the actor, repeating his lines over and over to convey his Asperger's Syndrome, charms us almost by rote. Disability isn't the hardest thing to convey about this character, his innate good is, and Khan does marvellously at this, showing us extreme humanity through extreme histrionic restraint. Unreality through realism, so to speak.

My Name Is Khan is an impressive film, without question. It's also Bollywood mainstream, an overlong film revelling in cliche and cinematic punchlines, but director Karan Johar shows admirable control through most of the proceedings, particularly in the first half. There is crowdpleasing constantly, but there is a fine balance struck, the filmmaker clearly compelled to see through this product with more sincerity than his last few productions.

The first half of the film, showing us a hapless Rizwan Khan being mistreated by airport security, cuts back to his story, that of an autistic child (a fine Tanay Chheda) being told by his mother (Zarina Wahab, a heartwarming casting decision) that people in this world are either good or bad: all stick figures are alike, and it all depends on whether they choose to hold the baton or the lollipop. 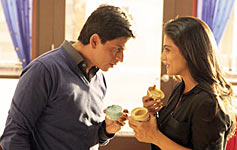 After she passes, Khan carries on. To America -- where he's told he has Asperger's Syndrome, and quickly memorises the symptoms -- and, to love. It is an improbable love story between the unlikely door-to-door salesman and the hairdresser, but Khan's persistence carries the day, despite the cinematic tropes and the too-easy start to the romance. It works only because by now, you're rooting for the man.

Kajol plays Mandira, the love of his life. Her character is a wishy-washy one, forcing the actress to exaggerate both glee and glum. She comes across as a bit too shrill in the happy bits, a bit too forced in the saddest ones, but there's no denying their now legendary chemistry. Kajol looks at Khan as if she wants him in every way possible, and this shows in every glance she throws at him, however cursory. And Khan, traditionally her cocky, defiantly take-charge lover, in this film looks away and giggles, covering his face awkwardly -- it's immensely hard to not warm up to Rizwan.

The film starts off with significant moderation, skirting away from heavy background score cues and demonstrating wonderful economy in telling Khan's backstory. Post-intermission, though, there simply doesn't seem to be enough of a tale to tell. Absolved of intrigue, the story unspools sporadically and ends up a fair bit too long. Yet My Name Is Khan does far more good than it does bad, a mainstream film taking more than a few steps in the right direction.

And so, after grand but workably operatic tragedy, we see Khan taken in by a kindly black woman with a heart of gold, and him single-handedly bailing out (literally) a tiny village in Georgia where cows outnumber humans, three to one. We see the birth of an icon, and while this is markedly simplistic an arc for a protagonist to traverse, the man himself sells it rather well. 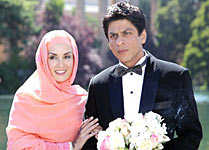 Despite what the promos will have you believe, this isn't a tale about autism or even about religion. All that is backdrop, albeit important backdrop. This is a Hindi film about a hero in mad, obsessive love with his heroine and doing anything he can to win her back, and we all know Mr K can do those. Also, about backdrop, it's wonderfully refreshing to see Karan give context to the locale, to see Shah Rukh gape in awe at the sheer size of San Francisco instead of taking to its streets in song.

The very mention of autism has already caused people to bring up Dustin Hoffman's work in Rainman, a childish and naive comparison considering Hoffman plays a highly gifted autistic savant while Khan is just a good man, in love, who happens to have Asperger's Syndrome and fear the colour yellow. I repeat, the Good is the hard bit. The film is a lot closer to Forrest Gump, in terms of one simple man's naive journey, but Khan's performance is anything but derivative.

Reference points aside, My Name Is Khan is a film that will have the galleries cheering and making sure there aren't many dry eyes in the house. The applause will ring wild and while many might complain that Johar has simply ditched old movie cliches for more American ones, none can argue that the segue seems surprisingly seamless.

Karan Johar's finally made his first grown-up film, and made it well. It could have been the stuff of much more, but let us leave that for another day. This is a film that will inspire, make aware, make happy. And for now, let us celebrate how the man whose name is on the marquee just proved why he deserves that crown he so often boasts of.