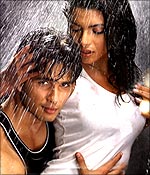 Once in a particularly blue moon, comes a film that makes you wolf-whistle. One that then ties you to the edge of your seat and forcibly pins you there and pounces on you, eventually leaving you sitting in the dark, drained and grinning and more satisfied than a film has any business leaving you. This, ladies and gentlemen, is that kind of ride.

Vishal Bhardwaj reinvents the filmi rollercoaster with feverish glee as he takes a wonderfully twisty plot and paces it flawlessly around a bunch of madcap, irresistible characters. It takes nearly twenty minutes to get used to things, the characters, the words they speak, they way they speak them, and the tone of the film -- heck, to get used to this film's world. Then on, the film just freakin' flies.

Yet before getting into the breakneck chaos, it is this unapologetic figure-it-out stance that we must initially applaud. Too often are our caper films and thrillers compromised by oversimplification and spoonfeeding, by filmmakers believing audiences need things spelt out and giving them bite-sized flashbacks to easily digest each twist. No more, says Bhardwaj, throwing us a delicious jigsaw and letting things fall into place in their own sweet time. The result is startlingly clever, an innovative film with genuine surprises. Kaminey is the kind of film whose success we ought all pray for, because it'll prove smart cinema works.

So delicious is the movie's gradual unravelling that I refuse outright to let you in on the plot itself -- an enthralling tale of drugs, deceit, dingbats and dead-ringers -- because you need to discover this on your own. Go in as fresh as you can, you deserve to taste this one by yourself. Letting on what actually happens would make me one of the film's titular knaves.

Suffice it to say that Tassaduq Hussain, who also shot Vishal's brilliant Omkara, does it more than adequate visual justice, and the largely-handheld film emerges very stylistic indeed. It's fast, funny and constantly rollicking, and the characters are spectacularly entertaining. 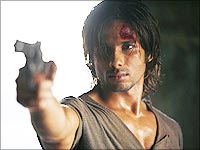 As is the cast. Shahid Kapoor plays Guddu the stutterer and Charlie with a lisp, saying f for every s, and does strongly enough to credibly seem like two different people; Priyanka Chopra's delightfully high-strung Sweety pulls off hysterical Marathi with impressive fluency. Yet it is the ensemble of fantastic oddballs who truly make this film special: from Amole Gupte's demented Santa Claus routine as Maharashtra-lovin' gangster Bhope Bhau to Chandan Roy Sanyal's lethally capricious coke-lover Mikhail, from Shiv Subrahmanyam's helpless corrupt cop Lobo to Tenzing Nima's ludicrously likable drug-smuggler Tashi -- the film is full to the brim with splendidly unfamiliar faces, each of whom deserve a hand, not just the ones singled out here.

And Vishal generously gives each character their time in the spotlight. Guddu heartwrenchingly recounts his middle-school love, while Sweety captures beer-driven arousal with charming realism. Bhope bribes a big-eared nephew with chocolate, while Lobo coaxes the stutterer to give a police statement through song. The Bengali gangsters shoot bullets near each other for laughs, while the Marathi ones are transfixed by Guddu-Sweety screensavers on a laptop. Charlie unwraps a cellphone from plastic as he tries to placate gangsters, while -- in an extraordinary moment -- Mikhail sets the screen ablaze as he staggers in on the same gangsters, high on coke and unpredictable as a broken roulette wheel. There's so much to marvel at in these characters that it isn't funny. Oh wait, it is. Very. 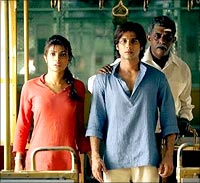 What raises this rambunctious gangster movie head and shoulders above its genre is the writing. The wordplay is constant, subtle and absolutely exquisite -- a tough ask when one hero trips over words and the other narrates -- yes, narrates -- with a lisp. And there's a witty duality running through the film's twin tales: a character barks into a phone, and this sound echoes later when someone pleads in front of Bhope, daring not to take his name but just calling him repeatedly big brother, "bhau-bhau"; Mikhail introduces himself to Bhope by calling himself Tope Bhau, and nearing the climax Bhope is told by another that they have 'topein' (cannons) too; when Mikhail wins a race, arriving just in time, he breaks into the Spiderman theme -- and Charlie responds with Fpiderman-Fpiderman. When a character wants to steal a king's ransom in drugs to help a pregnant woman, another snarls back: 'Toh kya meri coke ujaadega?' Ha. It's nuanced, lovely writing, the sort we never get to see in films nowadays.

Bhardwaj has never been secretive about his Quentin Tarantino adoration, referencing the director in Blue Umbrella and doing it here again with high heels and an injection. While Tarantino exclusively uses music he already loves because he doesn't trust anyone to create anything as good, Bhardwaj has always done it all himself, writing, directing and composing -- not to mention singing, and its worth noting the slight s/f lisp he gives the film's magnificent title track when it plays on screen. Yet here he takes a leaf from QT's book and brings back the saucy RD Burman track 'Duniya mein logon ko' (from 1972's Apna Desh) and makes it his own, giving it sassy new context out of its dated backdrop -- no more Rajesh Khanna in a red suit, this song is now all Shahid.

So the film leaps through implied ultraviolence and dark humour and you hold on, exhilarated -- just as you have through, say, Guy Ritchie's Lock Stock And Two Smoking Barrels. And while that itself would be no mean feat, Bhardwaj ups the ante with an audacious climax, suddenly bringing emotions right to the fore.

And while films of this ilk are full of disposable-bodies and corpses-in-waiting, one discovers that Vishal has -- sneakily, stealthily, surreptitiously -- kept the sentiments so darned real that by the time the climax rolls around, you do actually give a damn about these characters.

Wow. Now if that isn't kameenapan, I don't know what is. Awefome.