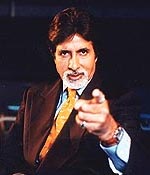 Amitabh Bachchan has confirmed that he will host the third season of Bigg Boss.

The superstar has settled his contract with Star TV -- where he had hosted the popular Kaun Banega Crorepati series -- and moved on to Colors.

Colors, already riding the high wave with hit shows like Balika Vadhu and Khatron Ka Khiladi, may have another hit to its credit.

Bachchan will take over from Shilpa Shetty, who hosted Bigg Boss in its previous season.

Do you think the Big B will make a good Bigg Boss host? Tell us what you think!

Balika Vadhu is no longer TV's No 1 show