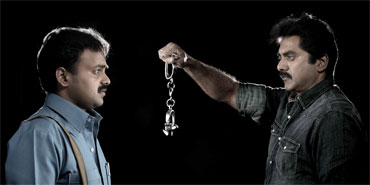 Tamil actor Sarath Kumar made his entry into Malayalam with a bang, in the magnum opus Pazhassi Raja.

Shooting of the film, produced under the banner of Nila Creations is currently underway at Thodupuzha.

Shaji Aziz is one half of the duo (the other being director Shyju Anthikkad who recently directed Oru Black & White Kudumbam) who earlier directed the Jayasurya-Roma starrer Shakespeare MA Malayalam.

Sarath Kumar says that the appreciation that he received for the role of Edachena Kunkan, the lieutenant of Pazhassi Raja, has been quite overwhelming.

He is also doing a prominent role in Christian Brothers, with Mohanlal, Suresh Gopi and Dileep.

Innocent plays a postman in a remote village, who is not too punctual. His son, played by Kunchacko Boban, does various jobs and usually has to spend a lot of money to settle issues arising out of his father's irresponsible ways.

At a certain point in the story, he finds certain letters addressed to a person named Yaseen Mubarak, which his father has yet to mail. He decides to find the addressee and the story takes some crucial turns from then on.

Kunchacko Boban, who made his comeback after a brief hiatus, is busy acting in quite a few films.

Oridathoru Postman has been scripted by K Gireesh Kumar. Anand Balakrishnan wields the camera and the music director is Mohan Sithara.