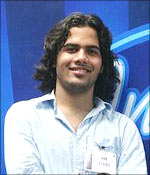 The saga of surprises continued on Indian Idol 5 this week. The singer who was never in the bottom three and who no one expected would bow out before the finals was eliminated. Naushad Ali Kawa, often hailed as the next Indian Idol by the judges and audience alike, was voted out.

Understandably, no one took it lightly. Naushad was so shocked that he started crying. Even his fellow contestants could not believe it and there was pin drop silence on the sets. This was one of the saddest eliminations this season.

It is during such eliminations that one starts questioning the correctness of the public voting system for a talent hunt show. If you look at talent and singing capability, there was no way Naushad should have been eliminated. There were a number of singers in the fray currently with capability levels far less than his.

This week, the format was changed in Indian Idol. Instead of an elimination on Monday, there was an extra gala round. Tuesday saw Naushad bowing out.

Hema Malini was the special guest on Monday and all contestants sang songs picturised on her. The day started with Salim welcoming Hema ji with an interesting rendition of Dream Girl. it was nice listening to Salim using short and sharp notes as opposed to the long, stretched and romantic ballad style-singing of Kishore Kumar.

The contest kicked off with Naushad singing the immortal Mohammad Rafi number Main Jat Yamla Pagla Deewana. He sang it with a lot of energy. Almost everyone praised his rendition and Salim even said Naushad was growing in stature with every passing episode. He was even selected as the Performer of the Week by the judges, only to be eliminated the next day.

One of the strong contestants for the Indian Idol crown, Shivam Pathak was next in line and he sang Koi Haseena from Sholay. He did a good job and received kudos from all the judges, including Hema.

Bhoomi was not so lucky. She sang Jab Tak Hai Jaan from Sholay, but failed to impress the judges. The main reason being that she chose a scale different from the original. The thing about most R D Burman compositions is that even if you alter them slightly, they sound jarring and that is what happened to Bhoomi's rendition. All the judges agreed that Bhoomi should have sung it in the original scale. Sunidhi even showed how Bhoomi had it in her to sing in the original scale, but did not want to risk it.

Sreeram's singing of Dilbar Mere was perfect. Another Kishore-RD combination from Satte Pe Satta, Sreeram sang with an open voice and a lot of feel. He scored in the areas where Bhoomi lacked. Like always, he received kudos from everyone present. Considering his consistency, he seems all set to become the next Idol.

And consistency is what is missing in Tia Kar. Her rendition of Mere Naseeb Mein from Naseeb was lifeless. She sang in tune, but without soul. Her strongest supporter Anu Malik made it clear that luck was with her.

Luck was with Swaroop Khan as well because he is becoming monotonous with every passing round. He sang Holi Khele and did a very good job. The judges were happy with him and Hema Malini even went on stage and danced with him. But he needs to work on versatility.

The highlight of the show was Rakesh Maini's rendition of Hamein Tumse Pyaar Kitna and the drama that followed. His rendition was soulful and garnered praises from everyone. He was then asked to sing Tumse Milke from Parinda, setting the stage for his fiancée's entry on stage. Rakesh was unaware that the producers had got her to Mumbai. He was pleasantly surprised and his fiancée shy. But it was an emotionally charged moment that everyone loved.

It's moments like these that make Indian Idol one of the is the most entertaining talent hunts on Indian television.