Inception: A sure blockbuster 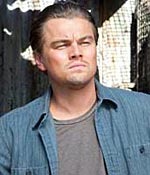 In director Christopher Nolan's Inception, each of the dream-spelunking characters carries a totem, a personalised object used to differentiate reality from the world of dreams. A loaded six-sided die, a custom-made chess piece. Doesn't matter. Just so long as it works. Otherwise, they could end up stuck in a kind of limbo, forever blurring the razor-thin line between truth and dream.

Audience-goers would be wise to carry similar reminders of the real world because Inception is a wild, enjoyable ride into surrealism, and ends up feeling much longer than its hefty 148-minute run-time.

The British-American filmmaker has long toyed with issues of consciousness and memory, and the intense psychological aspects of love and pain. Inception ties together the various threads of his career, in what amounts to his most ambitious work yet.

Dom Cobb (Leonardo DiCaprio) is a security agent of the most unconventional kind -- he guards people's subconscious thoughts. Wealthy clients pay him to ensure their dreams remain uncompromised, since the dream realm is where we all hide our deepest, most valuable secrets.

Cobb, an expert in dream extraction, also pilfers ideas from his clients on the side. He hates to live so unscrupulously but he's running from a horrific incident in his past that leaves him unable to return home to his family and work a normal job.

Now, suddenly, a wealthy Japanese client, Saito (Ken Watanabe), is willing to grant Cobb his ultimate freedom, so that he can be reconnected with his children. All he must do in return is something infinitely more difficult than dream extraction: dream inception. Specifically, he must plant an idea in the head of the heir to the world's largest energy fortune, an idea that will allow Saito's own business empire to thrive. But dream inception requires not just a dream-state, or a dream-within-a-dream state, but a dream-within-a-dream-within-a-dream state. Not easy.

To do this, he recruits a team of veteran dream thieves, along with a precocious young architect (Ellen Page), and sets about entering the mind of the heir (Cillian Murphy) during a cross-Atlantic flight. But just 10 hours, you say? That can't be enough time to implant an idea in someone's head? Ahh, but in Nolan's dream world, one hour of real-time is like 10 hours of dream-time. And one hour of dream-time is like 10 hours of dream-within-a-dream time. 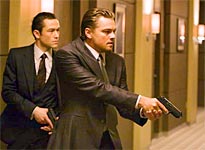 From there, things get tricky for our thieves, as layers upon layers of dreams start piling up, and the integrity of the dream system they've created becomes increasingly fragile, with potentially devastating effects.

Things get even trickier for Nolan, as he works hard to bring his five-story fugato to a harmonious close. It's glorious and entertaining, but far too busy, and still ends up slightly incoherent.

In interviews, Nolan says he's been developing the idea behind Inception since he was 16 years old. Like a personal dream, he's kept it close to him, where it's incubated through all these years of career success and growth.

To be clear, that idea is amazing, the product of a capable, fertile mind. But like all dreams, the vision seems to have been hard for Nolan to reproduce and convey while still making sense. That's Inception itself: a breath-taking kaleidoscope of fractured, fragmented emotions, thoughts and images, but with a few loose ends here and there.

Another problem is that, at times, the film feels like it's been neatly cleaved in two -- the story about Cobb and his wife, and the larger heist story. While the narrative works to bring the two together, they each could possibly serve as the basis of separate films.

As for individual awards, it's hard to imagine Leonardo not being recognised for such a fine performance. While the rest of the cast performs as expected, it must be said that Ellen Page disappoints as the architect student. The character's just a bit too flippant and immature.

The visuals are first class, and Nolan has convincingly played around with things as fundamental to our universe as gravity and time, all without relying too heavily on CGI.

Forget the hype machine and the mega-million marketing campaign, and what you're left with is an entertaining, intelligent film. Perhaps in its execution, Inception doesn't truly do justice to the incredible concept driving it. But it's a fantastic effort all the same, and a sure-fire blockbuster.

The Man Behind Inception

Dark Knight's maker is back with Inception