The clock that beat an earthquake 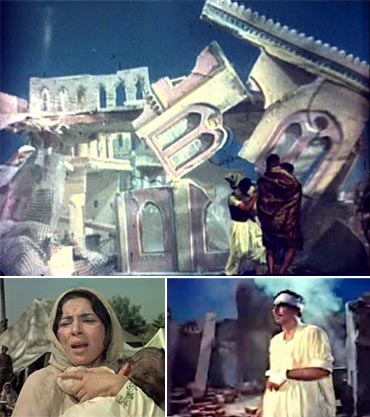 Reader Mohanrajan Pisharody shares with us a blooper that he spotted in Waqt (1965).

Waqt was produced by BR Chopra and directed by Yash Chopra.

In the beginning of the film, there is a scene where a major earthquake devastates the town and the entire house of Lala Kedarnath (Balraj Sahni) comes tumbling down.

After the quake, he comes back to see the wreckage and a wall clock is shown on the wall in tact, and still ticking. Even though it is shown to convey a message that Waqt is all powerful, it seems very strange that the clock was not damaged in the earthquake.

A damaged clock with the time standing still could have also conveyed the same message.

Aamir: Not always a perfectionist!