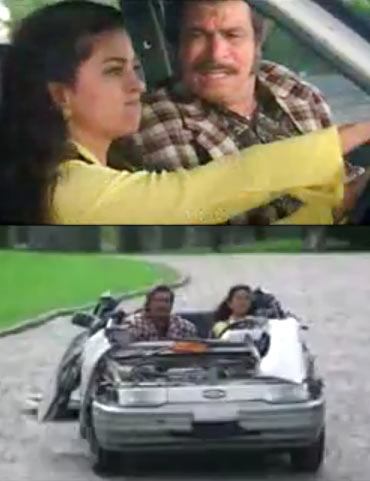 Reader Vaibhav Palnitkar shares with us a blooper that he spotted in the 1997 movie, Mr And Mrs Khiladi starring Akshay Kumar and Juhi Chawla.

There's a scene where Juhi takes her father -- played by Kadar Khan -- on a drive in a white car. When they first started out, Juhi is seen driving on the right side of the road.

After a series of shots where the car gets banged up, Juhi is seen driving on the left side of the road when she drops her father home.

Looks like the car stunts were performed in India with a Maruti Esteem while a smashed up Ford was used for the final shot.

Also Read: When Imran Khan got his lines crossed!

The clock that beat the earthquake

When Imran Khan got his lines crossed!