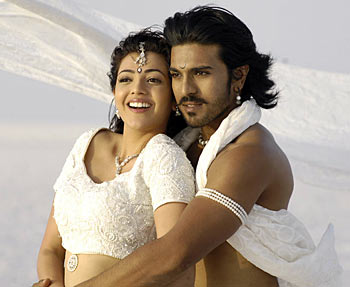 Mainstream commercial films dominated Telugu cinema in 2009. It was invariably the formulaic pattern which formed the core of most films barring a few which tried to tread a slightly different path.

The year was marked by Magadheera's rock solid performance at the box office followed by Arundhati. Incidentally both these films revolved around the theme of reincarnation. Arundhati and Magadheera created benchmarks in technical excellence and special effects.

There have been some good films with interesting storylines like Kalavaramaye Madilo, Baanam and Amaravathi which of course had a fairly decent run. Presented below are the good films of 2009.

Magadheera is the biggest blockbuster of Telugu cinema industry so far. This smash hit broke all records and ran for an uninterrupted 100 plus days. The film proved Rajamouli's record as one of the directors with the Midas touch.

A simple theme of reincarnation was woven into a period saga by Rajamouli and his father Vijayendra Prasad with incredible technical brilliance. The music by M M Keeravani, camera work by Senthil, art work by Ravindra and the SFX were the highlights which added a huge plus to the film.

Ramcharan and Kajal in dual roles (which were set apart by many centuries) shone in this reincarnation love tale. Magadheera's phenomenal performance was marked by marvellous collections too -- it raked in more than Rs 100 crore (sans the audio and satellite rights) for Geetha Arts, the producers. For Rajamouli, cast and crew it will remain a treasure close to their hearts! 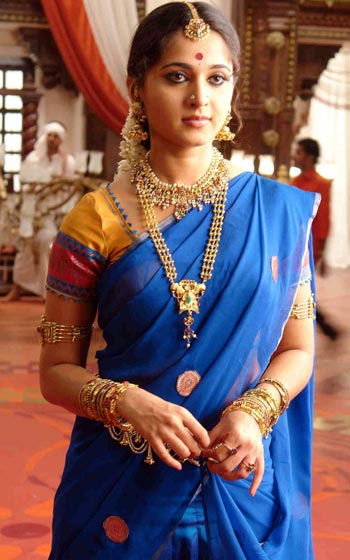 Arundhati, released at the beginning of the year just after Sankranthi, was the smash blockbuster of the year till Magadheera snatched the title. This tale of reincarnation and revenge found an overwhelming response from the audience.

Mind-boggling special effects -- quite amazing by Telugu cinema standards -- by Rahul Nambiar and his team, good art direction and wonderful camera work by Senthil and of course a well-conceived script and screenplay by Shyam Prasad Reddy and his Mallemalla Production team, and some fine acting by Anushka, Sonu Sood and Sayaji Shinde made Arundhati a runaway success.

The film was also dubbed in Tamil. 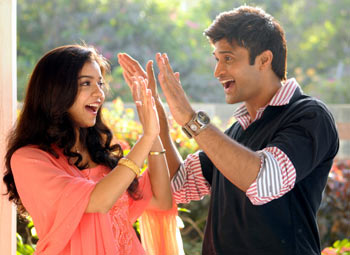 Music was the strong point of this emotional drama scripted and directed by Satish Kasetty.

Essentially a love story, the film was a tear-jerker with lead actor Swati essaying a brilliant performance as an aspiring singer. She was ably accompanied by Kamal Kamaraju and veterans Bharani and Gokhale. Sharath Vasudevan's melodious music was pleasing to the ears too.

Comparisons with K Vishwanath were made as music was the central theme of Satish's film as well as Vishwanath's but Satish had a language of his own to convey his expressions. Unfortunately, this good film was yanked off the theatres just when it was picking up steam. 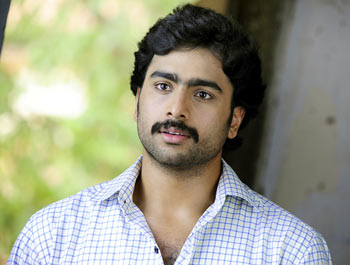 Baanam like Kalavaramaye Madilo, was shot wholly in the country (mostly in Andhra Pradesh) and did not have the usual commercial frills. Devoid of the formulaic pattern, Baanam had an interesting storyline laced with a message.

This father-son story was also one of ideology between father and son and between police and naxalites. Baanam was fairly neutral in the way it presented things. The film was shot against verdant landscapes by Anil Bhandari.

Director Chaitanya and Rohit together made an impressive debut. For a change, the audience got something different to see in Baanam including heroine Vedika in saris and not in glamorous itsy-bitsy dresses. 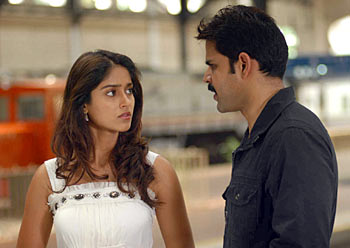 A story of a guy who gets a kick from robbing the rich and giving the booty to the needy, Kick, which released in May, was one of the hits of the year.

A light-hearted film, it had nothing much in terms of substance though Ravi Teja's comedy, a superbly-toned and hot Ileana (particularly in the opening sequence) and a smart Shaam (who makes his debut in Telugu cinema) gave it the necessary  punch.